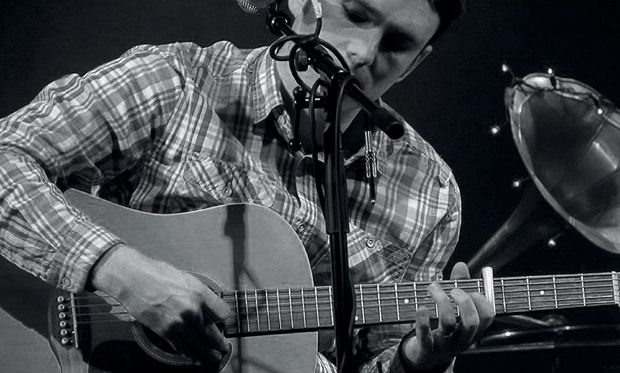 Having been nearly five years since the release of his last album, Glasgow artist Peter Kelly – aka Beerjacket – has now returned to captivate our ears with an innovative new project.

A collection of twelve songs, Silver Cords is more than just your average album. Accompanied by twelve short stories that go hand in hand with each track, it’s been three years in the making; and it was certainly worth the wait. Of the project, Kelly explains:

“At some point in the writing of Silver Cords, I decided the record would live in a book and that each song would be accompanied by a short story inspired by its lyrics. Story by story, approximately once a month, the songs’ siblings entered the room.  My imagination has superimposed details on the real-life buildings that inspired settings and, in some way, the stories play out there interminably now on three to five minute loops.”

Addressing themes of fear, isolation and loss throughout, the album continues with ‘Everybody’s Song’, intertwining Kelly’s delicate strumming of melodies with his flowing impassioned vocals and a gritty power, before the glistening folk-strewn grace of ‘Cord’ pulls at the heartstrings in all the right ways.

Whilst the comforting warmth of ‘Pillow’ oozes a stirring majesty, showcasing the sparkling sophistication of Kelly’s songwriting, ‘Hopen’ ups the pace, propelled by racing beats as it builds to an energy-fuelled cinematic soundscape. ‘Grey Areas’, on the other hand, ‘ strips it back to the endearing simplicity of just Kelly plus guitar, revealing a genuine melancholic finesse and a poignant emotion with shades of the likes of Conor Oberst.

Continuing with the dreamy, honey sweet harmonies of ‘Buttons’, the album then draws to a close with ‘Tiny Graces’. Ending on a reflective note, on this final offering Kelly exudes a twinkling pensive lyricism and tender charm, as one can’t help but be completely won over by this emotionally intimate and musically exquisite collection.

A truly unique concept, Silver Cords will cause you to stop in your tracks, reflect on life’s meaning and become utterly immersed in its raw, honest emotion.

Silver Cords is released as a hardback book with accompanying CD, via Scottish Fiction Records.