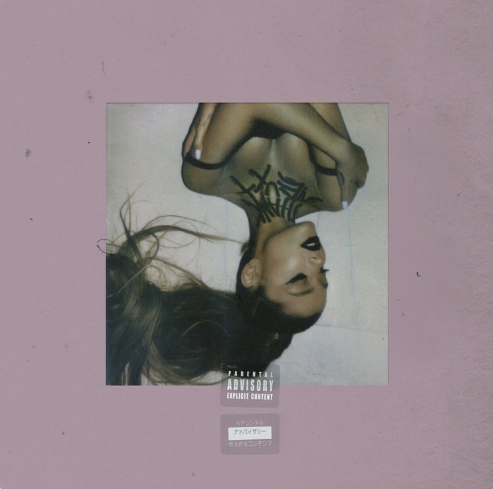 If it seems like Ariana Grande has had enough on thank u, next, I would say it’s understandable considering the turbulent 18 months the singer has faced.

After the tragic passing of her ex-partner Mac Miller in September 2018, she faced more time in the public eye after her break-up with her then fiancé, the SNL comedian Pete Davidson. This, all in the year following on from the horrific terrorist attack during her performance at Manchester Arena. Six months ago she released her fourth studio album Sweetener, continuing her ascent in to the top tier of pop playmakers, appearing reflective yet hopeful for things to come and the artwork featured a glossy image of Grande, flipped up and filling the whole space. thank u, next however sees Grande further back, still upside down but now a darker image, her eyes are now closed and her clothes are now black.

She attempts to juggle her issues, flitting between a focus on healing and self-care on “bloodline” “NASA”, “thank u, next” and throwing caution to the wind on “make up” and “7 rings”. On the latter the re-imagining of the melody from Rogers and Hammerstein’s “My Favourite Things” initially strikes as somewhat novelty, but after a few listens it’s pairing with Grande’s brassy ode to retail therapy works really well, and makes sense as part of the record as a whole. She finishes on a similar note with “break up with your boyfriend, i’m bored”, continuing her new found desire to consume, embracing her inner “bad girl”. As a track it works, it’s catchy and swaggeringly confident, though it’s placing as the final track leaves a question mark as to where Grande is after all this. The title track is the more obvious choice, it is Grande’s sweet ode to self-reflection “Say I’ve loved and I’ve lost/ But that’s not what I see” and self-care “But this one gon’ last/ ‘Cause her name is Ari/ And I’m so good with that” and it’s placement as the penultimate track leaves the album without an expected denouement, resulting in the project being more of a peek into her conflicted headspace.

It begins with “imagine”,  in which cavernous drums bellow as Grande describes a blissful, dreamlike scenario “Me with no makeup/ You in the bathtub/ Bubbles and bubbly” all of which is undercut by the sadness in it’s unattainability “Imagine/ A world like that”. Grande might take a more subdued vocal approach more often on thank u, next but still sells every song, the words sounding pulled straight from her bruised heart (impressive considering the healthy amount of co-writers). On “fake smile”, Grande sounds simply angelic on the chorus, her tender voice whistling away the melody; suitably fragile. The moments where the music is subdued her vocal becomes, like herself, exposed and vulnerable in the spotlight, such as on “needy” or the emotional focal point of the album; the atmospheric “ghostin”. It is through the sparser moments however where the steady, consistently glossy production occasionally leads into tracks bleeding together, and the most notably vibrant instrumentation comes only on the quickly plucked guitars of “bad idea” and the rocksteady dance beat of “bloodline”.

thank u, next is superbly executed pop, Grande exposing her insecurities and revelling in her blasé bravado as though the words were ripped straight from the pages of a diary entry. Whilst it would have been pleasing to hear some more variety in the instrumentals, and though there are some clumsy lyrical moments dotted across the album, it’s already a commercial success (“thank u, next”, “7 rings” and “break up…” already being hits) and to its credit “NASA”, “bad idea” and “fake smile” could easily join them at the top of the charts.