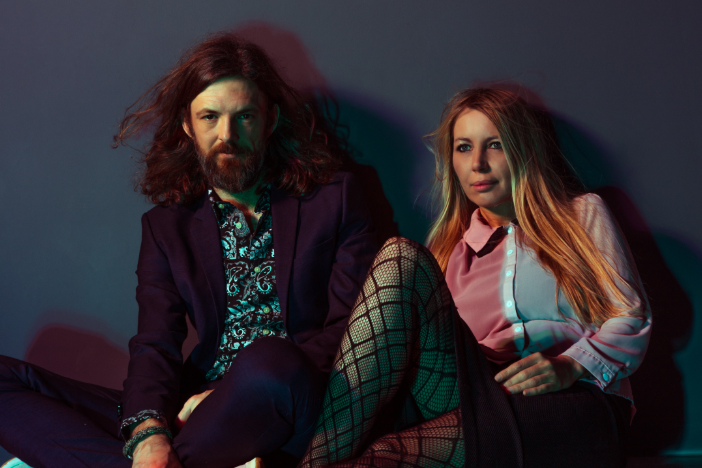 Nordic duo When Airy Met Fairy will release their new album Espirit de Corps this Friday. The pair have also released Going To A Town as the lead single from the album.

Espirit de Corps opens with That’s My Rock’n’roll Master which introduces Thorunn Egilsdottir’s beautifully soft and angelic vocal. Her voice is accompanied by the gentlest of keys and guitar strums, allowing her voice and the harmonies to lead most of the track.

Going To A Town, a cover of Rufus Wainwrights original, has a dramatic sounding and quite dark feeling opening which suddenly cuts to Thorunn’s naked vocal. I like the electric drum beat as it contrasts so well against the piano keys as Thorunn’s vocal switches up a notch. Speaking of their version of the track, instrumentalist Mike Koster said “I insisted on not hearing the original until it’s done. I wanted to stay a musical virgin in order to get involved in a creative way.”

Home Master is a lovely coupling of piano keys and electronic elements and Another Year Master is beautifully understated with its gentle harmonies and delicate percussion.

On Your Own Again incorporates a more contemporary sound when it bursts into off-kilter drum beats to accompany the strings. It Was Love has a similar vibe with the drum beats strung together with the keys and the strings that lend an almost sorrowful sound by comparison.

Blanket Of Sorrow is the duos take on a Christmas song and it taps into the darker, more melancholic side of the festive season. A crescendo of organ keys lend a choral element to the track and blend seamlessly with Thorunn’s stripped-back vocal. A deep bass guitar adds broodiness along with the haunting harmonies.

Once combines a melancholic opening with some cool beats that shudder to the fore. Thorunn’s vocal sounds haunting against the resonating piano keys and it’s a stand out track on the album for me.

Under The Snow hints to more winterscapes and bleakness but is given a lift by the strong beat and perky guitar strums while final track Under The Rainbow is a paired back offering where Thorunn’s vocal sounds angelic when paired just with a stripped back electric guitar.

Espirit de Corps can be described as haunting and melancholic but the duo manages to offset those feelings with beautiful harmonies and Thorunn’s angelic vocal has the ability to lift each track. The contrast between contemporary beats mixed with orchestral-sounding keys and strings brings a fullness of sound and a uniqueness to the album.

When speaking of the album Thorunn Egilsdottir said “To me this album captivates the essence of who we are as people. No attempt to embellish anything. We left the sounds of me breathing and Mike’s instruments rattling while we switch between intensity and intimacy.”

When Airy Met Fairy formed in 2015 and released their debut album Glow in 2018 which received critical appraise from the likes of Clash, The Line of Best Fit and The 405. The duo has played shows all around the world and at notable festivals such as The Great Escape, Reeperbahn and Eurosonic.

Espirit de Corps will be released on Friday 8th May. Find out more about When Airy Met Fairy here and have a listen to new single Going To A Town below.