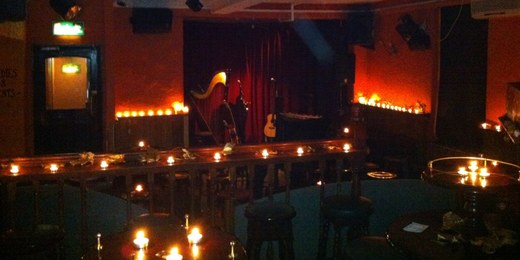 For those of you who don’t know what The Ruby Sessions is; it’s a weekly event held on Tuesdays in the intimate setting of Doyle’s in Dublin.

Each week, four acts are scheduled to play for 20 minutes each. The Ruby Sessions has been running for 14 years now, so these guys know what they’re doing. With many very successful artists having played here in the past, such as Damien Rice, Paulo Nutini, Mumford & Sons and Glen Hansard, the line up never disappoints. This week I decided to head along and review the show.

This weeks line up, once again attracted a massive crowd to Doyle’s, all waiting to witness performances from Jason Clarke, Orla Gartland, Bairbre Anne and Leaders of Men. With these four acts on the cards, and the beautiful candlelit setting of The Ruby Sessions, who wouldn’t head down for only a small admission fee of €6?! (All of which goes to the Dublin Simon Community, for the homeless; I must add).

First up this particular night was singer-songwriter Bairbre Anne, who has recently been over in London doing some writing and recording, and said she can’t wait to get back to it. Opening up the show with an original song from her debut EP Helium Heart, I immediately saw why a large percentage of the people attending had come solely to see her. Bairbre performed four originals and one cover of I Follow Rivers’ by Lykke Li. Of course, this got everyone singing along- as every song which is later made into a remixed club banger does! Bairbre had a wonderful, strong voice that sort of played Peek-A-Boo with an Alanis Morisette sound. Her set was pretty much the perfect chilled, yet powerful opener people want at an event like The Ruby Sessions.

Next to take to the stage was Jason Clarke, a Northern Irish singer-songwriter, accompanied by a band. As soon as Jason opened his mouth with the first line of an original song, Lawson immediately came to mind. With a writing style that could be described as a mix of pop and indie, and a beautifully smooth voice, Jason would easily fit into that very popular mainstream category that Lawson seem to be poster boys for at the moment. When Jason went on to sing his new song, I was instantly glued. The backing singer kicked in, and ultimately, the harmonies just came down and took the song to a whole new level, with a complete blend of tones that they executed delightfully. To finish his set, Jason attempted something that even he admitted should never be done, and to almost everyone there, it did sound like a disaster waiting to happen- a cover of Man In The Mirror by MJ. Brave or what? At least I thought it was brave, until I realised this was absolutely no risk for this guy; he smashed it. Hitting every note perfectly and making it his own in a modern sound, he had people singing a long to every chorus, and that’s always a good sign right?!

It was then time for the second last act of the night. The girl probably most familiar to The Ruby Sessions stage; Dublin singer-songwriter, Orla Gartland. Kicking off her set with a new-ish song, Jealous, which is up for free download on her Facebook, she really portrayed her capabilities as a singer; hitting those high notes with precision, and getting the powerful, abrupt guitar chords bang on. After the bit of chit-chat and promised humour that Orla always takes with her when performing, it was time for one of Orla’s most well known, and probably most lyrically heart-wrenching song- Devil On My Shoulder. Every time Orla performs this song, she manages to draw the crowd away from everything else, and just silence the room. This is one girl, one guitar, and one song; and to have the talent and the ability to do that to a crowd of people (especially an Irish pub!) is incredible. Admitting that she likes trying new things at The Ruby Sessions, we were next presented with a brand new song- Piece By Piece, before moving on to a fun, light-hearted cover she had also never performed live before- Another Brick In The Wall by Pink Floyd. Orla’s performances are always so relaxed and more importantly, they never fall into that trap of being fake- she’s a purely genuine performer. That, mixed with the beautiful friendly atmosphere that every week at The Ruby Sessions brings, will always be a winner.

Unfortunately, due to time restrictions, I was unable to review the last act of the night, Leaders of Men. One of the acts I was looking forward to reviewing the most; I was quite excited to see what they’d produce. No panic, I’m sure I’ll catch them again at The Ruby Sessions in the not so distant future.

Are you in Dublin on a Tuesday night with nothing to do? I strongly recommend you get yourself down to Doyle’s pub and discover four talented acts at The Ruby Sessions. You won’t be disappointed.

Also, you should be able to catch a review of The Ruby Sessions right here every week from now to the foreseeable future. For more information on The Ruby Sessions, visit: http://www.rubysessions.com/