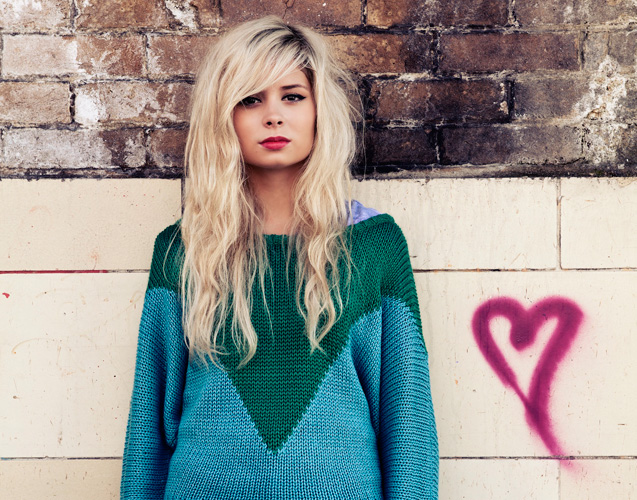 Scottish-born singer-songwriter, Nina Nesbitt has gathered a strong following of loyal supporters from her Youtube and live success.

The half-Scottish, half-Swedish,  songstress has captured the hearts of many, including Ed Sheeran and Example, and established herself as the one to watch for 2013. Signed to Island Records, Nesbitt prepares for the release of her 4-track ‘Stay Out EP’, which will be released April 8th.

Fortitude Magazine caught up with the singer, prior to her final UK tour dates, and discussed what it is like being Nina Nesbitt.

Hello Nina, how are you this morning?

Hello! I’m fine thank you how are you?

I’m a little tired, it is a Monday morning …

Do you mind explaining what encouraged you to become a singer-songwriter?

I think it’s something that I have always enjoyed doing, more as a hobby, but I think of the likes of Elle Goulding and Taylor Swift, the girls with the guitars, and taking that to a career level.

I feel that is really inspiring. So, I played a few gigs, uploaded a few Youtube videos and got some positive feedback, which just encouraged me to keep going and make it my career.

I read recently that you’re trained to play piano, flute and guitar. Do you think this helps during your writing process?

I never thought consciously about picking up a piano and guitar, it was just something that I was practicing playing. I never thought I’d pick this up so I can write a few songs.

Whereas, the flute I just picked up to help me through high school music. I don’t think I’d play it again now, but it helped me a lot with the theory.

But, knowing these instruments, does keep the writing crisp and interesting. I usually write my ballads on the piano and my more upbeat songs on guitar to give it that sort of mix.

Social media has been a key for a lot of musicians, including yourself, at spreading your name, but how do you feel it has supported you to build a community across these networks?

I feel that my Youtube followers have been really helpful, but I do think a big chunk of it has been because of playing live. I’ve, obviously, supported bigger artists and I feel that was the first step that got me getting fans, well apart from Youtube.

However, after people have seen me live, they’re usually more accustom to check out my Youtube videos and follow me on Twitter, as such. I think performing live and using the internet goes hand in hand. I’m pleased for both of it and the internet has been key for me really.

You mentioned there about going out with bigger artists, you were personally invited by Ed Sheeran to join him on his European tours. How did that come about?

Well, I had played a lot around the UK with him before that. Then, in Edinburgh, he randomly invited me out on his tour. It was a very, right time, right place, moment, which led to him inviting me back for his European tour.

Then, shortly later, I went around with Example, which I didn’t think I’d ever do. The experience was amazing and it supported my own headline shows. I feel it’s quite daunting looking back at that tour, but it has definitely improved my shows.

Talking about your development, ‘Apple Tree EP’ really opened the door for you and caught the attention of many, but how do you feel your music has evolved since then?

I think the ‘Apple Tree’ was written about 2 years ago. I was about 16 and 17, at the time, so I feel that I’ve grown up a lot since that release, especially seeing a lot of the world.

I’ve matured and I feel that my music has too. It’s a lot more clean sounding, kind of edgy, I think, but not too far away.

You’re preparing for the release of your 4th EP, ‘Stay Out’; what was it like working with producer, Jake Gosling?

He was really good. We’re really good mates too. So, it was a lot of fun in the studio.

I brought forward my ideas for it and he definitely made them come alive, which is good!

You’re signed to Universal Music Group, what is it like having your name alongside a major label?

I’m signed to Island Records, an umbrella of Universal, but I think at first it was quite weird for me because I ran independent for a while. I just used to just record, release and upload anything, most of the time, at the same time.

Then, when joining them, they were a bit like, “we need to have a talk about that first” [laughs]. However, when you finally understand how it all works, they’re an amazing label and I’m so glad that I went with them rather than any of the other labels.

We all work as a team, so it has been really beneficial and, also, allowed me to work on my album that I’m, currently, doing now.

With dates in London tomorrow (12/03) and Edinburgh on Saturday (16/03), what are people missing out by not seeing a Nina Nesbitt headline show?

Well, this will be my first ever show with a band – so that’s new, which is quite good.

We’ve got lots of new songs that I’d like to try out, which potentially feature on the album, as well as some of my older work.

With the end of those dates, you discussed there about working on an album; what’s expected?

It’s already, kind of, written. I’ve got a little writing session next week, which will be my last one and kind of cool, but I think that will be fine. It’s actually already part recorded, but I’m heading back into the studio for the whole of April to finish that all off and by the end it shall be completed.

Have you pencilled down a release date for that or is it too early to say?

I’m kind of thinking the end of August, at the moment, but I’m kind of playing the whole thing by ear.

Our final question; so other than yourself, who would you advise that us and our readers check out?

Thanks for doing the interview and I’ll let you head back to bed.

Thanks for the interview. I’m now off to band rehearsals!

You can catch Nina Nesbitt performing live at the Assembly Hall, Islington (12/03), and the Liquid Room, Edinburgh (16/03). Why not check out her latest video for ‘Statues’, which features on ‘Stay Out EP’, below: