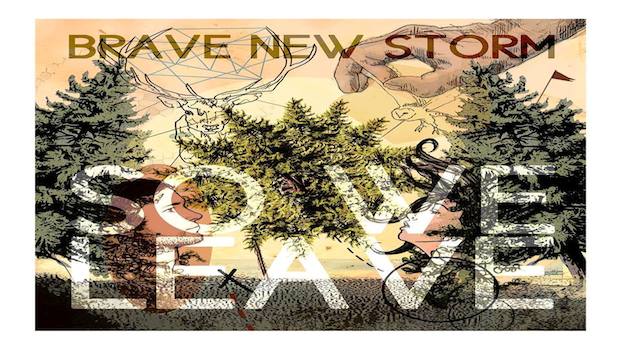 It is always intriguing to catch a band early on in their career to get a feel of how they develop over time, and Brave New Storm are no exception.

Eighteen months since the release of their eponymous debut EP, the Sheffield-based indie folk sextet have finally produced a follow up in the form of ‘So We Leave’. Short and sweet at barely above the 15 minute mark, this record is the perfect example of a young band refining their art and realising their sound.

The first thing that grips the listener about ‘So We Leave‘ is how much the bands sound has matured since their last outing.  A change in lineup has seen the arrival of a new rhythm section in the form of Aidan Hughes and Henry Parkyn-Smith, and the additional vocals of the former allowing the band to expand their vocals harmonies.

This is almost immediately apparent on the opening track, ‘Peaks’.  Atmospheric birdcalls introduce the song, with rich, gloomy cello later supported by delicate acoustic guitar.  The drums are remarkably powerful, and with the introduction of violin and the main melody there is an added sense of cohesion in the group.  The tone is somewhat darker than their last EP, and the sound is more routed in traditional folk.  It’s definitely playing to the bands strengths, and the music sounds much more complete as a result.

‘Walden’ is an upbeat and almost chirpy affair, featuring a flurry of strings and gentle keys which are reminiscent the indie folk of their previous work. Despite being a solid song in itself, it doesn’t match the feel of the rest of ‘So We Leave‘, and lyrically isn’t as strong. On a full length album it would be a welcome bit of variation, but in this context it is oddly disjointed and caused the pacing to stutter slightly.

Despite clocking in at under two minutes, ’Ghost’ is the most deeply atmospheric song to feature here, completely devoid of percussion and making full use of groups’ exceptionally skilled vocalists. The soaring harmonies featured on the track are truly staggering, demonstrating the talents of all three singers and how much stronger the band is for it. ‘So We Leave‘ ends with ‘Halfway Home’, perhaps the best song on the EP, with violin and cello intertwining expertly between mesmerisingly sparse verses. The ending is very similar to the records predecessor; an extended instrumental encapsulating the combined prowess of the band, a rich, subtle and fitting conclusion.

New and established fans of Brave New Storm alike will be thrilled with ‘So We Leave‘.  They have not attempted to simply copy their previous EP, and have musically developed in such a way that compliments and improves on previous work as opposed to disregarding it completely.  Their folk roots have shone through in a powerful way, yet there is enough intrigue within their arrangement and sound to keep things interesting.  The time is right for Brave New Storm, and we eagerly await their first full-length release.