5 Acts not to miss at Kendal Calling. 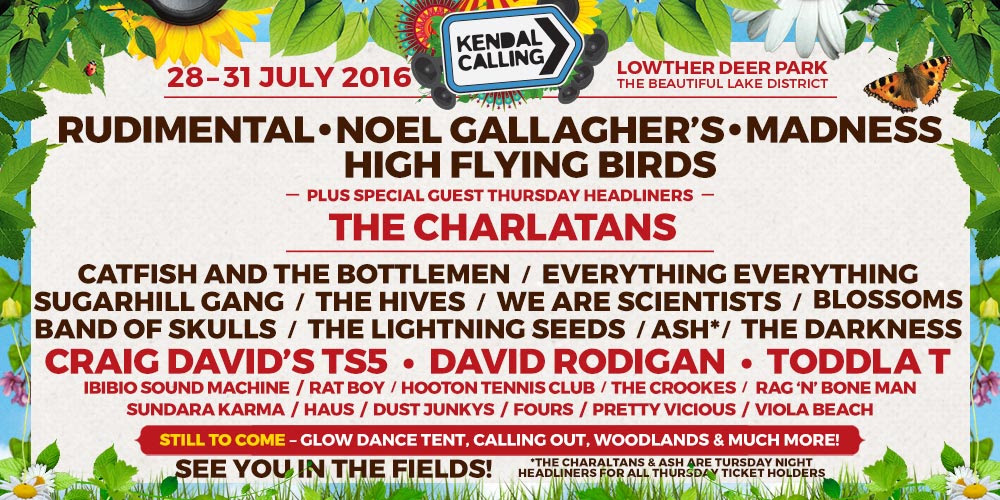 Festival season is upon us and once again thousands of people are heading to the Lake District for  a weekend packed of music, comedy, movies and many other activities. From 28-31 July Lowther Deer Park will be the beautiful setting for this amalgamation of acts and is presenting one of the best lineups of the year. With so many great acts on we’ve whittled it down to 5 that you must not miss:

This five-piece Stockport band have rocketed to success since forming in 2013. They have been listed as number four on the BBC Sound of 2016 list and included in Spotify’s Spotlight on 2016, MTV Brand New for 2016 and tipped by many sites and publications to be one the best new bands of the year. With a recent spot helping to open Glastonbury Festival and a debut album due for release on 5th August, Blossoms are definitely a band to make a priority to go and see.

An English ska band from Camden Town, London, that formed in 1976. With a catalogue of anthems in their arsenal, Madness are a great band to sing and dance along with as you will more than likely know all the words.They attract an enormous crowd of all ages who all stomp around and wave their hands together as if they’ve known each other all their lives.

8 years after splitting these indie rock greats embarked on their reunion tour in January 2016. They sold 10,000 tickets in 6minutes for 4 homecoming shows with fans travelling from all over the world to be a part of their reformation. Having influenced many of the bands that are currently selling out arenas, (The Courteeners and Arctic Monkeys to name two) Milburn are back to show the world what we have been missing during their hiatus.

A top five list wouldn’t be right if it didn’t feature Noel Gallagher. The former Oasis lead guitarist/songwriter has continued his success in his solo career and is still producing some the best songs he has ever written. Expected to be one of the highlights of the weekend do not miss seeing him performing his solo music and a mix of his greatest hits from Oasis.

If you want a change from the music Kendal Calling have “The Soapbox” stage which features comedy, spoken word, talks and other fun activities. Jason Manford is one of the country’s best loved comedians and started his career when he was 17 working in Manchester. He is now a household name and hosted his own comedy show “Comedy Rocks” on ITV.

Surely not a one to miss!