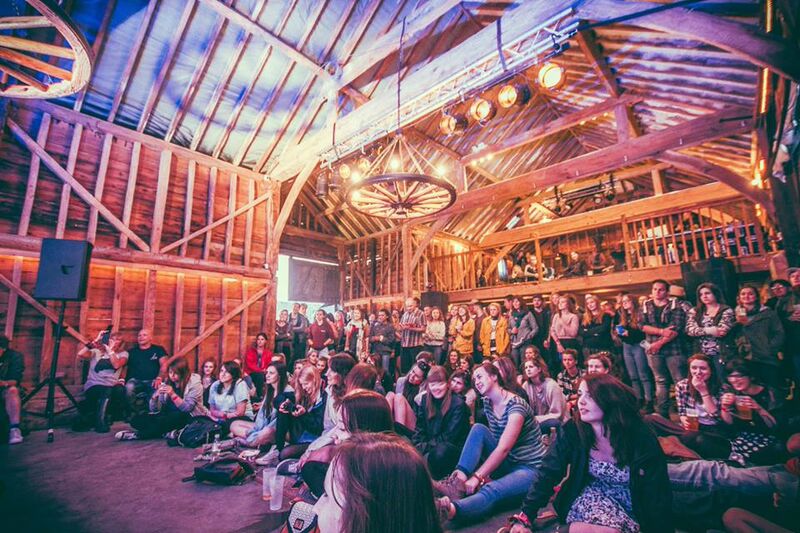 With July fast approaching, Gloucester’s award winning Barn on the Farm festival is soon to showcase another year’s most promising up and coming artists, as well as a headlining bill of some of the finest in the current scene.

We’ve nit-picked our way through the appetising line-up to narrow down just who really stands at the top of the pile this year. Check out our Top 10 MUST SEE acts for 2015, and don’t forget to let us know who you’ll be heading along to.

This mellow, intricate guitar driven songster is set to play quite a few dates across the UK over the next few months, and will stopping at Over Farm for what promises to be a stunning set at Barn on the Farm. His ‘When Darkness Comes’ EP is riddled with complex guitar riffs, tangible lyrics and impeccable vocals.

Brighton quintet, Fickle Friends have been stirring quite a buzz in the UK, and having released their debut EP ‘Velvet’ this year, the hype is only growing. With their new-wave pop sound of upbeat instrumentals and Summer-scented melodies, they’re a definite for festival stages!

Following the release of his EP ‘Take Out Of Me’, Leicester singer/songwriter Martin Luke Brown has received respectable support across the industry, particularly with title track from the EP. Set to play a number of UK dates over the Summer, Martin’s live presence is one of energy and passion. ‘Take Out Of Me’ is a track which Martin says “reflected a rebellious year after leaving London, where I just indulged in various things and it ultimately left me feeling a bit empty”. Other tracks on his recent EP include ‘Stitch’, which revisits a fading relationship, ‘Thorns’ and ‘Bring It Back To Me’, both of which speak about the support of his family.

2015 has seen a persistent increase in momentum for Hertfordshire artist Rhodes. Having released his latest EP ‘Turning Back Around’, Rhodes then went on to perform at Burberry’s LCM fashion show just a few days ago. Causing quite a hype, we cannot wait to witness his live show on a festival stage. His latest offering ‘Close Your Eyes’ is quickly gaining a mass of attention.

Northern Irish singer/songwriter has been honing his craft for many years, stretching from his debut release in 2000 with ‘Blueprints’ EP to his second studio album released in 2013, ‘Joy Of Nothing’, including plenty of EPs in between and another studio album. His intricate, deeply rooted folk sound is bound to radiate a positive live presence across the Barn on the Farm site.

Following a trilogy of EPs after solid years of perfecting her songwriting, building a respectable following, and working towards her album, UK singer/songwriter Lauren Aquilina delved into the process of her anticipated debut album this year. Now set to support Taylor Swift in Hyde Park for Barclaycard’s British Summertime, Lauren is gaining immense momentum in the lead up to the album. The progress in her songwriting, from ‘Fools’ EP, through ‘Sinners’ EP, to ‘Liars’ EP, has been reflected in her live show, and having to unfortunately cancel her slot at Barn on the Farm last year due to illness, we’re looking forward to her mellow pop blend taking over the main stage.

This Scottish synth-pop three-piece were a definite highlight for us at last year’s Barn on the Farm. Showcasing contagious energy, quality music, and festival-esque, anthemic music is what Prides do best, and Gloucester’s Over Farm is the perfect place for them. Their 2015 single ‘Higher Love’ is an icon of their musical development and it’s looking likely that this year’s set will even top last year’s, and that will be something to witness.

Their 2014 album ‘If I Was’ rapidly made The Staves one of the most talked about bands around, and rightly so. The sisterly folk trio smashed a UK tour in February in support of the new album, and followed up on a European tour in April. We’ve heard great things about a Staves live show, so we’re pretty excited to see them take on a festival stage as intimate and charismatic as Barn on the Farm.

Potentially and probably the biggest breakthrough artist of 2015, James Bay has exploded since we caught up with him at Barn on the Farm last year. To think this guy played the second stage at the festival last year, and has since been turning heads worldwide, between the lead up and even moreso since the release of his debut album ‘Chaos And The Calm’. With ‘Hold Back The River’ being a real hit, and ‘Let It Go’ coming right up behind it more recently, the atmosphere for Bay’s set this year is likely to be the best of festival season all round. This will be James Bay’s only festival headline set of 2015, so lets watch him take the wheel.

Our number 1 act to catch at this year’s Barn on the Farm is UK/Australian rock outfit Sunset Sons. Their 2015 release ‘The Fall Line’ EP led them to a headline tour across the UK and Ireland, on which they was extremely well received, and also set them up for numerous festival appearances across the Summer season. When chatting to Rory of the band last month about the festival, he told us: “I’m a country boy at heart so I can’t wait!”. We’re very much looking forward to hearing their festival-filler, sun-kissed, “drink-in-hand” tunes belted out across Gloucester’s best weekend. Make you sure you get down and catch these guys. Don’t worry, we’ll be around to thank later.

Full Barn on the Farm line up: 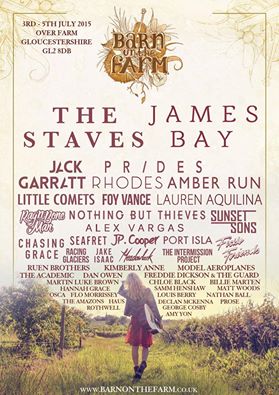