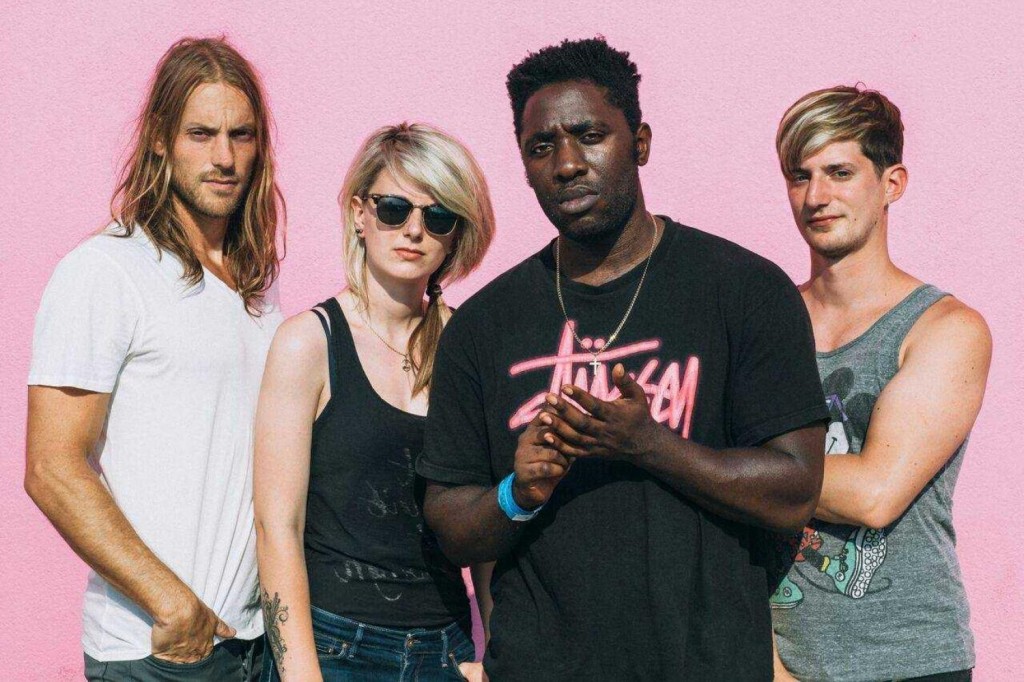 It seems to be rare these days for a band to maintain longevity and relevance but Bloc Party are one of the few that have managed to consistently produce incredible, enduring tracks that have turned into modern-day classics. Call me biased but Kele Okereke is undoubtedly one of the best songwriters of the past decade, and I for one am intrigued to see what direction the band take following their reincarnation.

The other night, the  St. John at Hackney Church played host to a blinding live set by indie heavyweights Bloc Party. This London gig on Friday 4th December was the last stop on the UK leg of the band’s current tour and they wanted to go out with a bang.

With four studio albums of material, and another due for release in January, it would have been no mean feat trying to choose the set list. They played songs which spanned over all five albums, and opened with ‘Eden‘, a pounding, atmospheric track from their forthcoming record Hymns. But the crowd really got pumped on hearing the distinctive opening to ‘Hunting For Witches’ and also ‘Song For Clay’, two of my favourite songs from A Weekend in the City, an album that provided the soundtrack to my late teens.

A wealth of tracks from Silent Alarm — the album which is constantly fighting against A Weekend in the City for the personal title of ‘best Bloc Party album’ — were also featured on the set list. ‘Banquet’, ‘Positive Tension’, and of course indie classic ‘Helicopter’ made the cut and sounded just as great as they did when I heard them the first time round, which is a staggering 10 years ago.

The audience were given a taster of new album Hymns and the band’s current single ‘The Love Within‘, which I’ve been on the fence about, sounded great live so it may be a grower. Upcoming single ‘The Good News‘ is a world away from the Bloc Party of old with its country twang and downtempo melody. Album tracks ‘Exes‘ and ‘So Real‘ also shun the trademark Bloc Party formula of aggressive guitar-heavy intros and unforgettable lyrics with questionable meaning. St. John at Hackney Church was a beautiful venue and the stained glass windows were lit up in a rainbow of colours by the stage lights. It felt like a very fitting setting as many of the tracks on the new album feature biblical references in the lyrics such as “Take me to garden, feed me poisoned apples” on ‘Eden‘, and “Every day I go down the water and I pray” on ‘The Good News’. There’s quite an astonishing contrast between these new songs and the band’s classic tracks which aren’t so clean-cut in their lyric-content and meaning.

Hymns looks set to introduce us to a new sound for Bloc Party, and although I feel nostalgic for the raw, gritty sound from Silent Alarm, I’m not going to be too quick to judge their new offering. With headlines being made regarding the loss and replacement of 50% of the band’s members it’s no surprise that this change has resulted in the exploration of a new musical avenue.

Before the band took a short interlude, frontman Kele Okereke announced that they had a “little rocket in their pocket”, and that was of course dance-jam and fan favourite ‘Flux‘, the track that caused the world to take a collective intake of breath when it was released back in 2007. The track’s electronic basis was a move away from the heavy guitar riffs that Bloc Party were known for, but even 8 years later it sounds just as fresh.

Despite suffering with a cold, Kele powered through the remaining songs and his enthusiasm for playing to a crowd in his home town really shone through, so much so that his belt decided to give up on life part way through which he put down to consuming “too many pies”.

They closed their set with the timeless ‘This Modern Love‘, and bode us farewell. But as we were filing out of the venue the crowd suddenly surged back towards the stage as Kele reappeared and announced that they were going to do something a little different and special and proceeded to play some bonus tracks. They played the beautiful ‘Signs’, one of the lesser-known tracks from Intimacy, with Kele taking to the keys which was a lovely surprise, before finally closing with the classic ‘She’s Hearing Voices‘. The hollering of “red pill, blue pill, red pill, blue pill” by the crowd was an exhilarating, collective highlight.

It seems to be rare these days for a band to maintain longevity and relevance but Bloc Party are one of the few that have managed to consistently produce incredible, enduring tracks that have turned into modern-day classics. Call me biased but Kele Okereke is undoubtedly one of the best songwriters of the past decade, and I for one am intrigued to see what direction the band take following their reincarnation.

Following a tour around Australia, Bloc Party will be back in the UK at the end of January when they’ll be headlining the NME Award Tour 2016 which kicks off on Friday 29th January in Cardiff. Hymns is due for release on 29th January.

Check out current single ‘The Love Within‘ which has been dividing opinions and ‘Helicopter‘ which was released in 2005 below and admire the crazy contrast both visually and musically.