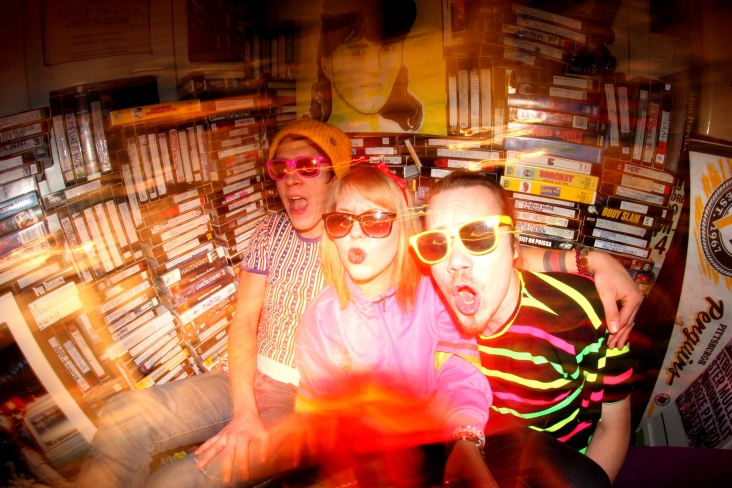 Being a teenager is hard. Just ask Finnish outfit Have You Ever Seen The Jane Fonda Aerobic VHS?. Better known as HYESTJFAVHS?, their wholly Californian sound is a stupendously catchy and boppy nostalgia trip that will make you regress to your teenage years.

Bubble-gum rock at its very best, they are a band that are all about blushed cheeks, spilt beer and having fun. It may be rainy in the UK, but HYESTJFAVHS? will make at least feel like the sun is shining.

Aside from their striking name, the Kouvola-based three-piece differ from any other garage-rock group in their unconventional lack of a guitarist. Instead, the band uses retro Casio and Eco-organs to create lively melodies and distorted sound walls, making them one of the most entertaining and refreshing outfits on the current scene. Blending the new-wave overtones of Blondie with the bubbly charm of bands like Summer Camp, Beach House and Best Coast, HYESTJFAVHS? create a wave of free-feeling vibes that’ll have you moving and shaking in no time at all. Simply put, its a real task trying not to smile as you listen to them.

Having successfully released ‘(Do the) Shämäläin’, the first single from their forthcoming debut album, the Finnish band have returned with their second single ‘Family Man’. The single instantly sets the tone for their playful, yearning sound. Inspired by a wide range of genres from rock to 80’s dream pop and 60’s soul/girl groups, the trio’s twist of doo-wop and flower-punk attitude creates the perfect end-of-summer soundtrack. As the three-piece describes:

“‘Family Man’ presents the band at its best with its rich but simple melodies, trashy sound and rock action attitude”.

If you can get your head over their unconventional name, the tireless trio are definitely worth a listen. Give them your time, and they’ll give you a piercing, uncompromising and fun sound that’ll have you reminiscing for days.