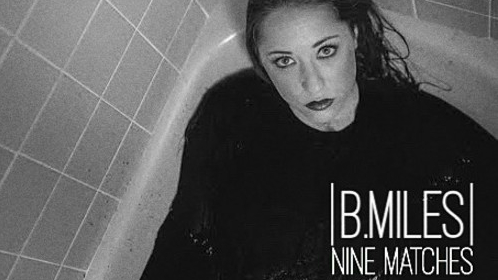 Eloquent, sophisticated and streetwise. These are all words that describe the pulsating sound of new R&B heroine B. Miles. Following on from the opulent debut track ‘Nine Matches’, the dark-pop artist has announced the release of her sophomore single, ‘Shaking Hands’ on the 28th August. Harmonically convoluted and chock full of sass, B. Miles is one to keep your eye on.

‘Shaking Hands’ is a scattergraph of squeezed bass lines, jazzy guitars and melodic vocals. The Los Angeles-based songstress has described her latest track as “a twisted version of “The Boy Who Cried Wolf”: a more complex take on the classic fable that’s perfectly in keeping with her atmospheric sound. A darker shade of grey than most pop tracks, B. Miles carries a riptide of tongue-in-cheek lyrics and soulful harmonies.

Press comparisons have ranged from matching the operatic pop digressions of London Grammar, to resonating the peculiar but enthralling vibes of fellow American Quigley. Falling somewhere in the middle, B. Miles offers a plush sound that beats to a rhythm of its own making.

Despite earning a number of plaudits, most notably from the likes of Q Magazine, B. Miles has stayed true to her own ambitions and musical blueprint. Crafted during her relentless gigging of the Sunset Strip, B. Miles wants to remain true to a pop aesthetic and grow organically as an artist. As far as we at Fortitude are concerned, she’s well on her way to becoming something special.