Uncertain And Dangerous Times Ahead For Egypt 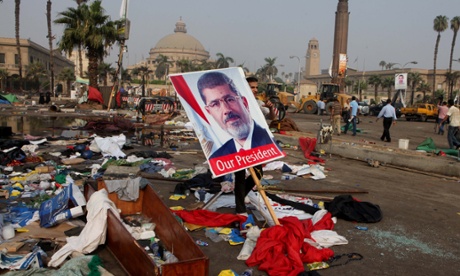 Just 19 months after the revolution that toppled President Hosni Mubarak in Egypt the North African country has become a hot bed of political uproar, mass protest, bloodshed and loss of life.

The Egyptian revolution was one of a string of revolutions that is now known as The Arab Spring, following the overthrow of Colonel Gaddaffi in Libya. It offered hope to all who were oppressed and had a lack of representation and protection from their government. Tunisia and Yemen’s leaders   Zine El Abidine Ben Ali and Ali Abdullah Saleh respectively also reached a similar fate at the hands of their people during their own revolutions. However, since President Mubarak was overthrown and replaced by Mohammed Morsi, things have not gone as expected for the Egyptians. Almost from the offset there have been failings by the newly implemented government and the revolution.

Signs that all was not well post-revolution were clear as early as February 2012, when the disastrous and dangerous cocktail of sport and politics mixed during a football match in Port Said, Cairo. Violence broke out between supporters of Al-Ahly and Al-Masry resulting in 45 people being killed, of which some were police. The hooligan ‘firm’ of Al-ahly was known for taking part actively in the protests and riots that lead to the overthrow of Mubarak, and as sectarian violence spread from the football stadium into the streets of Cairo the police force, in favour of new President Morsi, were accused of allowing the violence to continue before intervening. This incident continues to cause tension as unrest broke out almost a year after the events, during the hearing of those involved. As the rest of the world looked on in shock, and with clear links to the revolution the previous summer, it was obvious from this point just how much of a bubbling cauldron Egyptian politics was… so is it really any surprise that it has now boiled over into the sorry state the country now finds itself in?

The attempt to implement a new constitution that would have allowed Morsi’s government to force laws through parliament without being discussed or agreed to was a further stab in the back to the revolution. A government made up of 66%of Islamists would then have been able to turn the political wheels away from a type of democracy that many fought to safeguard and improve during the revolution, towards one heavily influenced on Islamic ideals. While the constitution that was suspended as a result of the uprisings actually states that “principles of the Islamic Sharia are the main source of legislation,” in Egypt there are also contradictions that state that the courts of the land are able to judge for themselves which principles should be upheld and when. In short, the constitutional state of Egypt was a mess before, and is a mess now, and as the country moves ever closer to civil war, this is likely to be one of the main sticking points between the Islamist Muslim Brotherhood and those in favour of a more democratic style government.

Fast forward to the last few weeks and the state of Egyptian politics has taken a further ugly turn. Following further attempts of reform towards a more Islamist state by President Morsi around the time of the anniversary of his searing in, protests demanding his immediate resignation broke out across the country, followed by clashes with those who were in favour of the apparently authoritarian leader. Although sugar coated as best as leader Abdul Fatah al-Sisi can, the coup d’état that came as a result of these protests has not only made a mockery of the revolution and ended almost all hope for those who wanted a more democratic nation, has plunged the Egyptian country and its people so close towards a civil war the situation is at breaking point. As a state of emergency was called last week during the massacre of innocent Egyptian people, and propaganda appears all over state run TV channels accusing the Muslim Brotherhood of being religious fundamentalists al-Sisi – who has said that he could be interim leader for as long as a year while he tries to forge a new constitution – is accused of having the blood of ‘his’ people on his hands. As well as this, Egypt is fast losing friends on the global scene, the usually cautious and tight lipped US President Obama has said that the US cannot continue with the ‘traditional’ military cooperation with the North African country as long as the national army clashes with civilians; while William Hague has, as usual, openly criticised the events in Cairo and expressed his concern for democracy in Egypt.

So what is to become of Egypt? As mentioned above, the way things continue to plummet further into uproar and disillusionment with the government from either side of the political spectrum, civil war seems to be a real possibility. This is a dangerous situation for Egypt; one only has to look at near-by neighbours Syria to see how this turmoil could end, which should make other surrounding countries Israel, Lebanon and Sudan sit up and take notice. If civil war was to break out in Egypt, Hezbollah could suddenly find itself having another stage to exercise Islamic fundamentalism which could ultimately turn peaceful supporters and members of the Muslim Brotherhood into sectarian foot soldiers in a bloody civil war that could spill over and shatter the peace of other Arab world countries. With Mubarak now released from detainment it could be possible for him to weed his way back in with those Egyptians that are against the ‘Islamification’ of the Egyptian state, completely reversing any forces of change that have so far come about since he was ousted. While for the time being that seems unlikely, given his unpopularity in the first place, if clashes between the government and civilians continue, and more and more innocent people become victimised and singled-out as being ‘extremists’, anything could potentially happen and it is difficult to rule anything out at this moment in time.

The Arab World is rapidly becoming a patchwork of political and religious uproar, during a time of increased uncertainty in the area, the rest of the world needs to look at this situation carefully. Could the world cope with an outbreak of such a war? With the refugee situation regarding Syria already out of control, what would become of refuges if and when they started to leave Egypt in the event of a civil war? There appears to be little compromise with the Egyptian people so far, the revolution now seems a million miles away, and there seems to be little hope for peace returning to the streets of Cairo anytime soon.