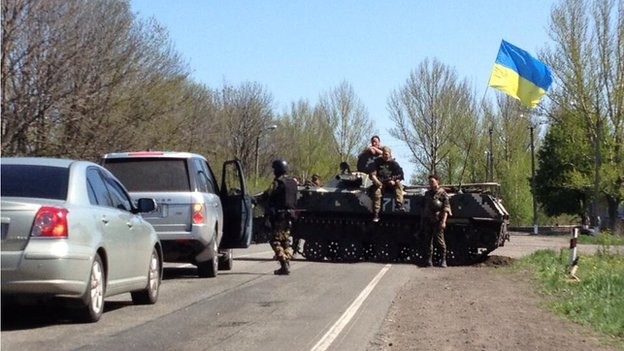 Today, Ukrainian forces have stormed Sloviansk, a pro-Russian stronghold in the East of the country. Following the events in Kiev and Crimea, the Ukrainian authorities seem to be asserting their authority over those areas that pose a threat to their territorial integrity. This move is critical to Ukraine, as it will allow them to work towards meeting the criteria necessary to join Nato and the EU.

However, it is not without a significant risk. In the aftermath of the Georgia conflict in 2008, the world is acutely aware of Russia’s stated foreign policy, which is to defend the interests of ethnic Russians worldwide. Many of those in Eastern Ukraine are of Russian ethnicity, and so attacking Sloviansk is risking Russian military intervention on a scale much greater than was seen in Crimea.

It is almost certainly a gamble Ukraine are taking, hoping that Putin will not risk the international condemnation that incursions into Ukraine would almost certainly cause. Nevertheless, Putin has not previously shied away from Western criticism. The big question is will he risk escalating the conflict. Russian troops are poised and combat-ready on the border of Ukraine, and mobilising them would take a matter of hours. Russia has already instructed troops to begin exercises, and Putin has warned Ukraine of “consequences”.

However, it is our own response to Putin’s actions that will dictate whether Sloviansk is the flashpoint that causes World War III. Sadly, on that front, we have a pretty poor track record. Our response in the past has been to escalate, particularly in conflicts that involve Russia, and even more so when the battlefield is not either of our countries’ home territory. This has been proven repeatedly in Korea, Vietnam and Afghanistan.

As the next few days show how this crisis will pan out, let us not forget Einstein’s words: “I know not with what weapons World War III will be fought, but World War IV will be fought with sticks and stones.”