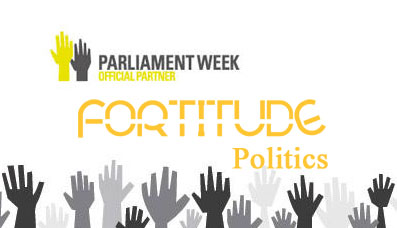 Last year, we at Fortitude Magazine covered Parliament Week, a series of events across the UK aimed at connecting young people to parliament and democracy. The week proved hugely successful, with one of the stand out events being twitter Q&A’s with select MP’s such as Tim Loughton and Meg Hillier. As a follow up to the twitter Q&A sessions we took the opportunity to put the questions of Fortitude readers to Tim, the Conservative MP for East Worthing and Shoreham. Here, we give you a selection of his answers:

– To solve the crisis of participation by young people in politics, should we not make the teaching of politics compulsory from a young age? Interest comes from understanding. Should we not help them understand from the age of, say, 11, and reap the benefits of their interest for decades to come?

Introducing politics as a compulsory subject risks it becoming another ‘boring’ lesson. The best ways for young people to learn about politics is through history and involvement with youth councils and organisations. Although, I do believe we need better PSHE in schools across the board.

– The protests in Hong Kong show that young people around the world are prepared to speak up and step up for what they believe in. What do you think needs to be done here to first bring out the same passion for politics, and secondly manage it in a way that wouldn’t see something similar to the 2011 riots?

Young people have never been more interested in political issues but don’t relate that to political parties and the establishment. Political parties need to learn from pressure groups about how to engage young people, and we need to use the example of the Scottish referendum to show that important issues affect everyone, whatever your age and you can’t just opt out. If we don’t do it in a responsible way then the subsequent disaffection could create a vacuum for extremists or violent protests, which is not the answer.

– In what ways has the rise of UKIP provided food for thought for the traditional political parties?

UKIP has been successful in latching onto a vein of discontent with establishment institutions in general and politicians especially. However, UKIP is no different from other political parties, although the interesting point is whether they have been successful in engaging the interest of previous non-voters, in which case we would all have a lesson to learn.

– What’s the future of higher education when today we’re paying more than ever before for degrees that are seemingly worth less and less?

Raising tuitions fees was a very difficult decision although the number of young people coming forward to register for university degrees has continued to rise.  What is important is that students have greater control over accessing good quality degrees that lead to employment opportunities and they should be demanding value for money from those universities charging the top rate of fees. With countries like India and China producing hundreds of thousands of graduates in areas like engineering, and upskilling their workforce, it has never been more important to make sure our students have got qualifications and skills sets that can compete with the rest of the world.

– One of the times young people felt most involved in politics in recent years was during the last general election, when many voted Liberal Democrat due to their promise to cut university fees, which backfired dramatically. Do you agree that experiences like this have left young people wary of becoming invested in the process again?

The tuition fee issue was hugely damaging for the Liberal Democrats, and they should answer for that. However, it did reinforce how politics is very relevant to young people and the engagement they subsequently showed at least produced some reforms to the original proposals, albeit not to the extent that they wanted. Hopefully, this will incentivise them to stay engaged.

– We saw in the Scottish referendum 16 year olds making responsible choices on big issues. Should we be looking at the possibility of lowering the voting age for general elections?

No I don’t support lowering the age at this time but that is not to rule it out permanently. However, the priority must be to find out why only 43% of 16-24 year olds voted at the last election and see what needs to be done to raise it closer to 65%.

– I have just come back from an EU run exchange program. Leaving the EU would cause problems for many schemes such as this one. If we left the EU would we miss out on the connectivity that it brings?

Clearly, there would be very big implications for everyone if the UK was to exit EU but we have had an unhappy relationship with our European partners over the years and this needs to be resolved. This is why we need to have a proper debate before an in/out referendum which the Prime Minister has promised in 2017 if the Conservatives win the next election.

– What can be done to bring credibility back to politics, given that the career politicians continue to exist in all but name?

– Are the ever lowering entrance requirements for universities devaluing the process as a whole?

They are not being lowered. We have raised the value of A Levels and the entrance requirements for universities are far more rigorous so they can be assured of receiving high quality candidates. Dumbed down courses attracting students not fit for university are quite rightly disappearing.