Parisienne Walkways – Invisible Thanks to Pollution 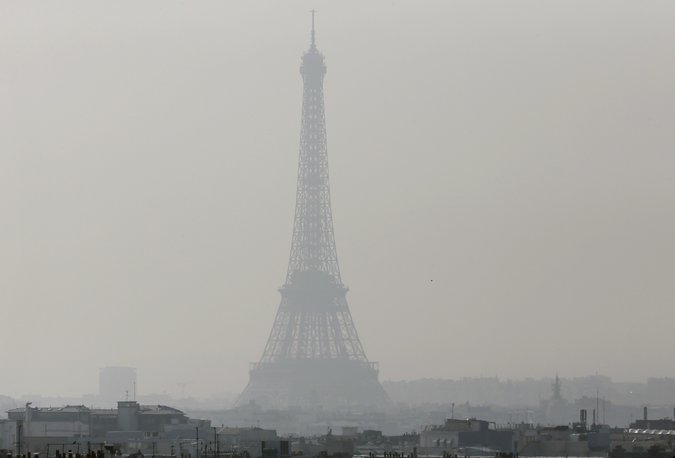 As smog descends over the French capital, transport authorities in the world’s most romantic city are taking drastic steps to combat the problem. First, star-crossed lovers visiting the city were given some compensation for the miserable views from the top of the Eiffel Tower as public transport was made completely free. Now, it seems that public transport is more or less the only way to get around, as a new ban has been introduced, cutting fifty percent of traffic from the megalopolis by banning even and odd number plates on alternate days.

As the temperature begins to clip 20°C, Parisians are being treated to one of the worst bouts of smog in years. After five days of dangerously high levels of particulate matter in the air, the government decided to act to improve the air quality. Over 50 checkpoints were set up around the city, imposing fines of 22€ for those violating the ban. It seems hardly likely that this will cover the estimated 4 million euros a day the authorities are losing on providing free public transport.

While the ban is not expected to last beyond today after the air quality reached safe levels, it raises some significant questions about managing pollution in big cities. It was heavily reported that similar measures were taken in Beijing prior to the 2008 Olympics, but there’s little evidence that it is actually effective. It is at best an emergency measure, and is unlikely to be sustainable in the long term. Whatever the effectiveness turns out to be, we are certainly not dealing with the root causes of pollution in this way.

Of course, electric vehicles were exempt from the restrictions, as were those that were carrying three or more people, and it is perhaps worth considering this as a long term solution. Although there are already incentives for buying electric vehicles (reduced taxes, congestion charge exemptions, and so on), there’s no real disincentive for buying a petrol or diesel vehicle. Serious restrictions on usage could be the push needed to get people into cleaner means of transport.

However, one argument often overlooked is the source of the electricity that runs these cars. While clean at point of use, the production of the electricity often involves burning huge amounts of fossil fuels, and as such could actually make pollution worse as our grid steps up to the excess demand. We need to work on cleaner energy sources before we push too hard for everyone to drive electric cars.

Which leaves the only real possibility as public transport. Smelly, infrequent, expensive public transport. The links simply are not convenient enough to encourage real people to leave their cars at home. It costs me 42p per mile to travel into my local city. It takes approximately ten minutes to travel each of these miles, which is really only a little bit faster than walking (a brisk walk is about 15 minutes per mile), and I have to wait half an hour between buses. It’s not really a very attractive option.

Paris shows that there’s a real problem. But as yet, there is no solution. And, surprise, when we finally realise we need to do something serious about the issue, it is going to be very, very expensive. Better to start moving towards cleaning up the UK’s electricity now, before it’s too late to be able to save money by taking our time.