Interview: Heydon Prowse “Young People Can Hold the Balance of Power If they just Voted” 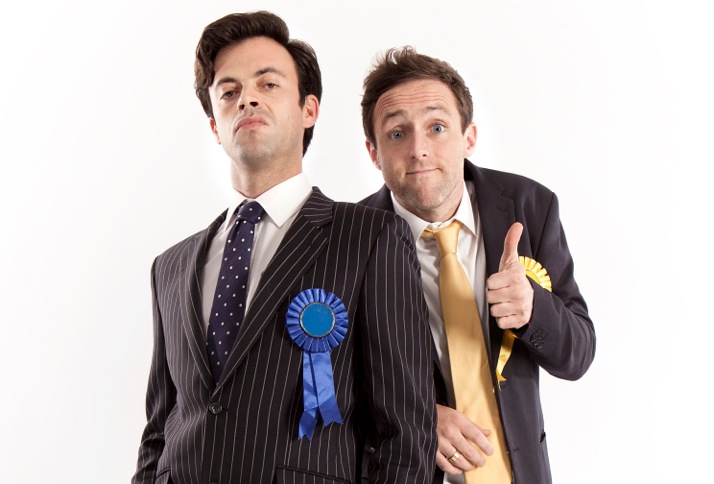 BAFTA winning  BBC 3 Show, The Revolution Will Be Televised has taken UK TV by storm by offering a brand new perspective of British politics to a new generation. The brain child of  Jolyon Rubinstein and Heydon Prowse, The Revolution Will Be Televised, is about to have their BBC 2 debut this tonight. To celebrate this event, we managed to grab a coffee with Heydon to talk about Noel Gallagher, the ridiculousness of UKIP and political apathy in the UK.

So three seasons of The Revolution Will Be Televised did you ever expect it to have so much critical acclaim?

We were really nervous in the first series because we wanted it to be REALLY good. We had a lot of success online and it was exactly how we wanted it to be online. We were worried that when it transferred to TV it would become placid and diluted. But you know in the end we were really happy with how it came across, that was in large was to do with the cool producers and commissioners at Hat Trick Productions and the BBC who were really brave.

Why did you choose a sketch show instead of dominating the UK TV scene with something similar John Oliver’s Last Week Tonight / The Daily Show (Jon Stewart)?

Well, firstly because it is a bit boring just sitting in a studio commenting on politics, what’s going on and people. It’s much more interesting to go out and do stunts as I feel it makes it far more empowering. It’s also really hard to do a studio show and it’s not really what the internet is about is it? Or maybe it is. There are a lot of those guys who do Youtube podcast type shows now. But I think we felt that we wanted to go out and expose stuff in the real world. It was always a mix between journalism and comedy, so a lot of the early stuff and even stuff from the revolution was about exposing things.

Do you get a lot of comparisons to Spitting Image?

Only in the sense that it’s satire. Often people write that there hasn’t been any satire since Spitting Image. But hopefully Joe public will be more aware of our show when our first Revolution special is shown on BBC 2 this Sunday.

The mission of the BBC is to be as politically neutral as possible, do you ever get in to situations where you think that maybe it’s a bit too extreme / bias for viewers?

The BBC is really good at that and it’s important they are because there is stuff we would have done online that wouldn’t be suitable for TV, but I think  it has worked out really well. I think the BBC has been really good at moderating the way we and how we satirise subjects and are deeply aware of the people’s sensitivities to the subjects that we tackle.

Have you had any skits left on the cutting room floor that you can tell us about?

There are loads of sketches. I don’t think I’m allowed to share with you but some really really great sketches that never made it to air for legal reasons. Sometimes we pitch ideas that we thought could be really funny but the political climate made it not at all appropriate.

Of all the characters you’ve created who do you love playing the most?

I LOATHE playing Barnaby [Lib-Dem MP], he’s such a loathsome, sniveling rag. I’m not an actor by trade so I’ve had to learn to disassociate myself from a character as you can end up empathising with characters – especially if they are buffoon comedy characters – it can be dangerous… so if you’re watching yourself doing it you really have to distance yourself. I enjoy playing Raf in the spandex but when I first did it I was terrified, as I wanted to do serious journalism.

How did American’s find the characters you filmed for seasons 3?

The Americans are generally so much more extreme than half the characters we play that they didn’t even know we were playing characters half the time. English people just GOT it and knew you were being an idiot. But Americans were like [in an American accent] “I like this guy!”. Even as  Wayne Danger (who is outrageous) they are like “I LOVE this guy”.

You’ve gone up against Nigel Farage, Tony Blair and David Cameron, do they know you by name now?

Yeah they do and their security crew have our pictures. Sometimes they are really nice and smile about it but sometimes when we try to pull a prank on the Prime Minister they become all serious. Apparently our pictures were in Sandhurst in the guard booth.

Have you found any topics particularly difficult to approach?

I watch the Trews every day and Russell Brand was talking about how corporations have destroyed our economy and politicians are sleeping with children is there anything the public will stand up against? Yourself and Jolyon do what you do and nothing really changes from a public point of view do you find that frustrating?

I find it incredibly annoying. During the French revolution, right up until the point until it actually happened and it became a blood bath of the upper classes, there was a huge amount of love for the royal family. There was parks that were open so commoners and the royal family could mix together, at the time they were starving but they had so much love for their establishment and aristocracy. I think people are afraid of change, especially in this country. It’s like the whole Scotland referendum. Huge amounts of young people turned out to vote ‘yes’, but older people voted ‘no’. They were scared of the implications of change, it seemed like they were thinking better the devil you know so they didn’t have to deal with a vast amount of change. What really frustrates me is young people not voting, if you look at the demographics, young people can hold the balance of power if they just voted. Only a quarter voted in the last election! 65+, almost all of them voted. We have a country run by the older generation, which means all the policies are skewed towards the older generations and I think there is this real tendency to find the absolute solutions to things but it’s never like that, it’s always messy. Just because Westminster is flawed absolving yourself completely and thinking “I’m not going to get involved in this” is a really really cynical way of looking at the world.

You say people are afraid of change but can you explain the UKIP phenomenon?

People don’t realise how much of a big change it would be. I think Farage is clever, as every time he is asked a question he dodges it and returns to immigration and that essentially is masking the vast amount of change that would happen if UKIP came to power (which they won’t) but we need to get out there and make sure they don’t. He’s very smart.

I was in awe or your UKIP Lenny Henry sketch, do you feel minorities are used as a political pawn in UK politics?

Politicians will use anything as pawns.

Do you think minorities need more of a voice?

Yes, 100% yes. But I don’t know how we’d do that. I think things are very stratified in this country, it’s so much about class.

I read In one of your interviews that yourself and Joylon have often been called traitors to your class. Do you think social mobility and lack of compassion to people of a lower economic background is a uniquely British problem?

Oh no not at all. Look at Europe. Look at Holland. Some really extreme political parties on the surface more than UKIP who are getting a lot of support. It’s a totally universal thing happening everywhere. We are way more passive aggressive about our racism in this country. That’s why so many British people say “I’m not racist but . ..” as we are so aware of social norms and political correctness but underneath it all are actually racist.

The political landscape in Britain seems way more apathetic than ever, do you think people are getting political correctness and free speech mixed up too much?

It’s a really hard one. Like it’s socially acceptable to say a joke about a German that is slightly racist, but it’s not socially acceptable to say a joke a about a Pakistani person that is racist and there are reasons for that as it’s to do with persecution – who is on top and who is the underdog. Will Self said the other day that satire is the function of holding truth of power. If power uses satire to bully the underclasses then that’s just bullying. What we do on the show is effectively bullying BUT it serves a useful function to stop people from getting a Messiah complex and people becoming in love with their own power like Tony Blair, look what happened there. Free speech is vital but it depends on how you wield it.

A lot of people suggest that particularly in our generation “millennials” we don’t have anyone leading to political change from a music point of view. The 60’s had Dylan, the 70’s had the Sex Pistols and the 80’s had Billy Bragg / The Smiths how do you think we can encourage a new generation of musicians?

It’s really sad isn’t it? There is so little isn’t there? Noel Gallagher is the only one that’s saying something. He’s really cool because at least he doesn’t have to say something overly political, he’s just anti-establishment as he will talk about the hypocrisy of the music industry and just take the mick. It seems everyone has lost their balls, controversy creates good PR, people should get in to it for their own interests and start saying stuff.