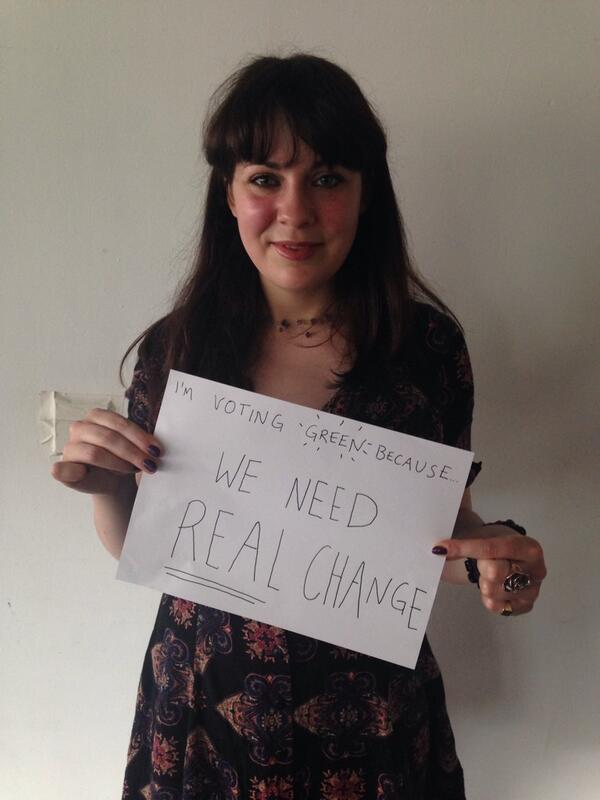 If you are a Green Party member at present, you could be forgiven for feeling a little deflated over the past week. The endless sea of optimism that seems to go hand in hand with the Greens has more recently been accompanied by what many see as a crushing sense of reality. Natalie Bennett, in particular, has found herself subject to intense criticism. Ideological. Unrealistic. When it comes to the Greens, we’ve heard it all before.

Yet while you could sit and pick apart Green Party policies until you are blue in the face, one thing that cannot be disputed is the motivation of many of the people behind the movement. Of these, few are more impressive than the Party’s deputy leader Amelia Womack. I recently sat down with Amelia to talk about all things Green.

At the age of just 30 it is hard not to be impressed by a woman who is carrying the weight of the fastest growing political party in the country on her shoulders.  What is more, she is doing so in an entirely voluntary capacity, holding down a 40 hour a week full time job in the process. Some might see this as tiring to the point of exhaustion, yet Amelia thrives on the pressure, and what is more seems to genuinely enjoy her work with the Green Party. In an age of career politicians, scandals and abuses of power, it is wonderfully refreshing to come across someone who not only is in such a high positon, but is so through her own determination to make a difference.

As the nitty gritty talk of modern day politics begins, we get into the details of both Green Party policy and Amelia’s own personal feelings about big issues. She chose the Party, she says, because of its message. There’ll be no politics in a dead world, no future, and therefore environmental policies should come first.

But she’s keen to stress that that’s not all the Green Party is about. Asked for some non-environmental reasons to vote for her party, she turns to tuition fees, and implores us to “think of all those politicians that had a free university education but are now making £70,000 a year, and should be paying enough tax to ensure that we reinvest in the next generation so that they can also have a free education.” With such focus on policies like these, it is easy to see why the Greens are proving so popular with today’s younger generation.

Yet it is not just their policies on tuition fees that have turned young people onto the Greens, says Amelia. Each Green Party policy is drawn up democratically, with every member having a vote, and it is this value that most attracts youth to the party. Amelia states that “a lot of our generation feels like politics happened to us”, and for this reason it is important to show them that they can be as involved and engaged as they want to be, and in turn show those in power that the younger generation is worth engaging.

During our discussion we cover all manner of topics, from the economy to views on Mcdonalds (even the Green Party deputy leader is guilty of a happy meal once a year), and it seems there is no question Amelia is unprepared for or unwilling to answer. Looking forward, she is excited about what the future holds for her and her party. She’ll be contesting the Camberwell and Peckham seat in May against current Labour Deputy Leader Harriet Harman. While her chances are slim to say the least, Amelia is proud of the message that two women deputy leaders going head to head sends, particularly in a parliamentary system where women are massively underrepresented.

However her aspirations do not solely lie in Parliament but also in the grass roots movements that she has so involved herself in since first joining the Greens, and it is this trait that differentiates so many members of her party from the establishment. While many may write off the Green Party as a party of the heart rather than the head, their surging popularity cannot be ignored, and with young people such as Amelia Womack at the helm the future looks very bright indeed.