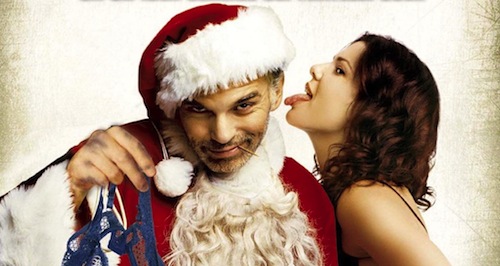 For day 9 of our Christmas Movie Advent Calendar, it’s another twitter suggestion and another first watch for me. Bad Santa starring Billy Bob Thornton as an alcoholic washed out mall Santa/crook who, every year robs the next shopping centre in the dead of night.

At 88 minutes it’s one of the shorter films of the selection however that’s rather a blessing. Although it was promised to me on twitter that it would be hilarious and it’s ‘a classic’ I found myself wanting it to be over throughout most of it.

Billy Bob Thornton takes the lead role as Willie in such a half arsed manner and the humour is often crass, crude and unfunny. It’s clear from the beginning that this is going to be one of those films in which the lead will surely learn a lesson about life and love towards the end but my GOD does it take a while for it to happen! Every time you think he’s about to change his ways he just gets worse. Swearing at kids and pissing himself at work. It’s fair to say Willie is the worst on screen Santa ever!

And yet, somehow, in the middle of all this is one kid who follows poor Willie around like a lost puppy. A kid who, throughout the film seems to believe that Willie is in fact jolly old Saint Nick himself and even goes so far as to accept this man into his home without a seconds hesitation. If this is supposed to be funny then I must be dead inside.

Another absolutely unbelievable aspect to this film is that somehow, SOMEHOW we have to believe that a woman like Lauren Graham would ever be attracted to such a vulgar man as Billy Bob Thornton. Saying that however, I have learnt that Thornton was married to none other than Angelina Jolie at some point so it seems anything’s possible. And yet still we don’t have flying skateboards from Back To The Future Part 2…

Although it spends the most part stuck in the 1 star position, the ending does lift it a bit. However only a bit. It arrives quite quickly and leaves just as quickly but it’s the most entertaining part of the film. As we finally see Willie change his wicked ways, although only VERY slightly, it’s a nice change. Bernie Mac and John Ritters performances before the big – if you can call it that – finale are really the only thing that keeps this film more interesting than it should be.

However this still should be considered a classic Christmas movie. With all it’s low points and its pointless existence, it’s still a treat to watch once a year I guess. Well maybe once every couple of years. Or once every 5 years… and only ever around Christmas.