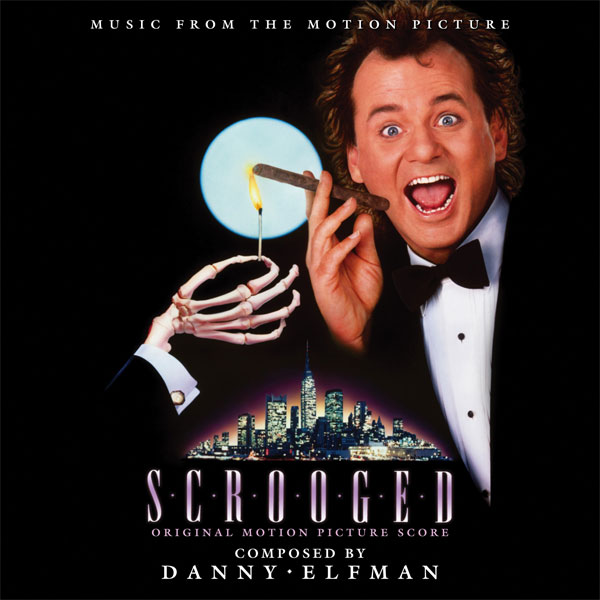 Now that we’ve officially hit the one week mark I feel I should finally feature a film which involves one of the most classic Christmas stories of all time. Since 1943, Charles Dickens’ A Christmas Carol has been entertaining audiences every year. And of course with a good story, it’s not long till a film adaptation is made. Thanks to A Christmas Carol being written before films became mainstream and after over a hundred years of cinema now behind us there are plenty of adaptations to choose from. From the Muppets to Jim Carey, the story has been done to death by countless people. But today, to ease us into the first of a few adaptations of the story, I’m going to feature one that I personally hadn’t seen beforehand. Scrooged.

Released in 1988, Scrooged is a twist on the classic tale which updates it to modern day. Or at least, what was considered modern day back in 1988. Now it is starting to look a bit dated. Had it been done today we might have had a cameo by Liam Neeson rather than Lee Majors in the opening scene in which Santa’s toyshop is raided by gunmen.

The story is still the same, although with a few slight differences. For example we still have the ghosts of Christmasses past, present and future visiting the protagonist, however for Scrooged, the protagonist is no longer Ebernezer Scrooge and has now been replaced with Frank Cross (played by the brilliant Bill Murray), a TV executive who is taught to stop his wicked ways of stealing cabs off grannies and killing old ladies with his scary advertisements for Christmas specials and shown the true meaning of Christmas.

Although it tends to get a bit tedious towards the end, Scrooged still has many good qualities. Murray carries the film wonderfully, using his great comic timing as usual. And we’re blessed with Bobcat Goldthwaite as poor Eliot Loudermilk, a much less confident character than his role as Zed in the Police Academy series (sidenote: if you’ve not seen Police Academy 2 and have yet to witness Bobcat in full swing do so as soon as possible!). But ultimately the film is nothing you won’t have seen before. Especially around this time of the year. Of all the Christmas Carol adaptations it’s certainly not the best – I think I speak for most when I say we ALL know what the best one is – but it’s not the worst either. If anything it’s a lovely comedy for a lazy afternoon in the build up to Christmas and a worthy addition to the list!

Of course the best Christmas Carol adaptation will be making an appearance at some point during the month and I’m sure it won’t take more than three guesses for you to know what it will be. But just in case you’ve not yet seen it I’ll keep it a secret for now…