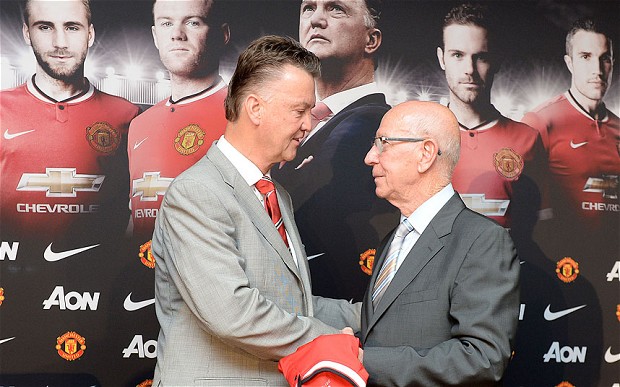 Manchester United throughout their history, not least over the last 25 years or so, are no strangers to accomplishing great feats in quick succession; in ’93 they won the first Premier League title for example, then in ’94 won their first domestic double. Recently though, the Red Devils accomplished another feat in quick succession – although on the face of it at least this one wasn’t something to shout about  – they unveiled their second high-profile managerial change in 12 months.

David Moyes’ tenure didn’t go to plan – why that is is neither here or there – but where he and Van Gaal have something in common is that both of their press conferences were hotly anticipated events, taking large chunks of the airtime across many news channels. In this article we aim to compare the basics of what both men had to say during their first moments in the United hot-seat before looking in a bit more depth at how both of them did.

We’ve all seen these press conferences before; especially Manchester United ones recently – there’s been two too many of these events (three if you include Giggs’) for Manchester United fans over the last year, I’d imagine.

David Moyes’ first press conference was very much what we’d have expected when his tenure was announced – a lot of thanking Sir Alex, a lot of appreciation for the traditions of the club, a lot of promise that he was going to do his best to immediately continue that success. He sounded confident, let’s just say that – but who wouldn’t if, as he said, one of the greatest football managers in history told you personally that he’d chosen you to be his successor.

Louis Van Gaal’s press conference, to the casual eye at least, was very similar to this, substitute Sir Alex Ferguson for Sir Bobby Charlton (as far as Manchester United icons go, that isn’t a bad substitution to make) and the personal recommendation by Ferguson for personal approval from the board (which we assume Moyes had thanks to SAF but whether or not he’d have got it otherwise is another thing) and you more or less have a carbon copy of Moyes’ conference. Van Gaal didn’t promise immediate success though; just that he would do his ‘utmost best’.

As is true of anything at the highest level, the devil is in the detail with these things.

First let’s look at the elephant in the room that both men had to face at the time of their conferences; Moyes had to deal with Rooney and Van Gaal had to deal with bringing the club back to where it has been for most of the last 25 years.

Van Gaal’s performance was a master-class in subtly laying down the law and managing everyone’s expectations. He was calm and collected but at the same time you just sensed that he was going to be taking no messing. Asked about the captaincy, he would take anything up to six weeks. Asked about new players, he said he’d take three to four weeks to see who would come in and who would go out. He answered the questions directly, just not in a way that would entertain what he surely knows can be a very vicious media machine when it wants to be. Picture him as a cross between two of the people he moulded at Barcelona back in the nineties – Jose Mourinho and Pep Guardiola. He was as measured as you see Pep in most of his press conferences but his persistent references to previous successes and insistence that his character was a key part of the results he’s been able to get everywhere he’s been was very much like Mourinho.

Moyes’ conference was a bit different; starting well, saying all the right things to the basic questions that came from United, but after that there were a few cracks that began to show. When pushed on Rooney, who last year had question marks raised over his United future by SAF, Moyes couldn’t confirm that the England international wanted to stay at the club – only that the club wouldn’t be selling. He also made a few excuses early on, picking at United’s difficult start to the season where they faced City, Liverpool and Chelsea in the first five games.

Of course these are only minor moments of weakness, but at the crucial times – a trend that would continue more and more frequently through Moyes brief tenure, on the pitch and off of it. On this basis then, if Van Gaal is to continue as Moyes did and the team’s performances on the pitch echo the manager’s performance in the press room, then United fans have a lot to look forward to! That outcome it far too black and white though – this is football, it’s never that straightforward. That’s why we love the game. One thing is for sure, whether Van Gaal sinks or swims, we’ll be covering all the action here at Fortitude Magazine!