Uruguay win the ‘Brawl in Natal’ 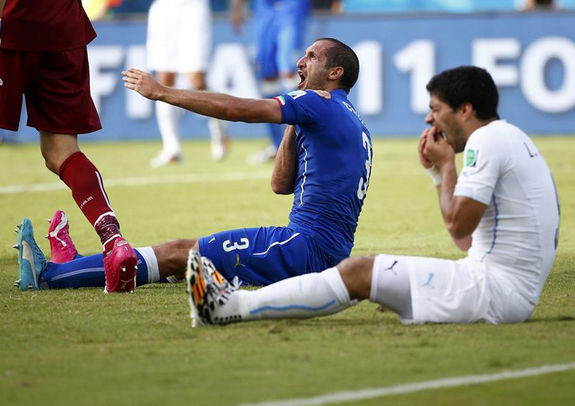 Uruguay won a feisty affair in Natal 1-0 thanks to a late header from Diego Godin that knocked Italy out of the group stages for the second time in two World Cups. This game however won’t be know for it’s free flowing football but more for its late tackles and controversy. The main man in the controversy is yet again Liverpool star man Luis Suarez. Replays and screen shots show that Suarez bit Italian defender Giorgio Chiellini on the shoulder and got away with it.

While England were playing in a game against Costa Rica where both sides knew their fate in this tournament, Italy and Uruguay were fighting for qualification. All Italy needed to do was avoid losing, whereas Uruguay needed to win or less they would be going home.

The first half saw Italy frustrate Uruguay as much as they could, limiting the Uruguayans attempts at scoring. For Italy, Andrea Pirlo tested the waters with a floating free kicked that was tipped over the bar by Fernando Muslera. But the biggest talking point of the second half was the booking of the main Italian striker, Mario Balotelli. His booking meant that he would miss Italy’s next game if they qualified.

The game wasn’t a footballing classic, more of a battle royal with players spending more of their time lying on the floor rather than playing. This was shown as just before the hour mark, Claudio Marchisio was given a straight red card for high boot offence against Egido Arevalo. The referee was only a couple of yards away from the incident so he had the best view of the incident. Italian captain Gianluigi Buffon and many other of the Italian players looked perplexed with the decision but they had to accept that they would have to play the final half an hour of the game one man less than Uruguay.

Straight after the sending off, Gianluigi Buffon made a great save from a Luis Suarez shot that was hit with the outside of his boot, but the legendary Italian keeper used his feet to block the shot.

With ten minutes remaining, both teams should have suffered a sending off as Luis Suarez and Giorgio Chiellini both went down injured. The replays showed that Luis Suarez head butted Chiellini, who responded with a elbow to Suarez’s head. Chiellini was claiming to the referee that Suarez had in fact bit him on the shoulder. A member of the Italian coaching staff was livid and his protests to the fourth official saw him get sent down the dressing room.

The late drama continued as Uruguay captain Diego Godin gave his side the lead as rose above the angered Italian defence to head in against Buffon.

This game wasn’t the most enjoyable to watch but the Uruguayans will be delighted to have just sneaked through the group stage, but they haven’t played that well in their three games. Italy will be bitterly disappointed that decisions didn’t go their way and that of course, they will be flying back home.