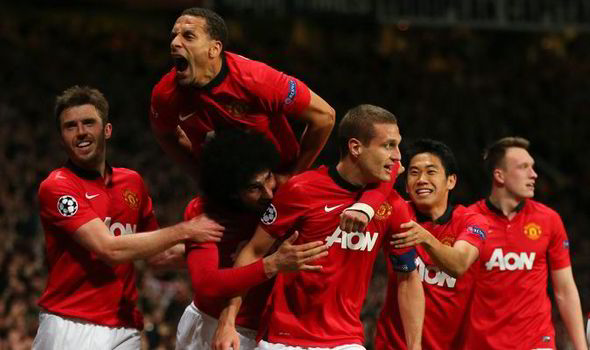 Manchester United put on a brave performance against European champions, Bayern Munich, to earn themselves a 1-1 draw in the first leg of their Champions League quarter final at Old Trafford.

Bayern, who were dominant throughout the game, could have been behind in the early stages as Danny Welbeck’s goal was disallowed. The United striker had controlled the ball and whipped it over Javi Martinez to produce a wonderful finish into the top corner only for the goal to be ruled out for a high boot. However, replays suggested the Bayern defender may have leaned into the England man’s boot.

Soon after this, Bayern settled into the game and dictated the pace, putting United under pressure for the majority of the first half. The best chances falling when David Alaba broke free on the left twice to put in crosses that were met by United players.

Although it was Manchester United who were under extended pressure throughout the first half, they produced the best chance five minutes before the break. Danny Welbeck was put through with a defence splitting pass leaving him with only Manuel Neuer to beat. The England Striker chose to chip the ‘keeper, which forced Neuer into a great save to deny United the lead.

The second half saw a different United as they came out attacking Bayern, believing that there was a goal for them in this game, and that goal came in the 57th minute. Manchester United captain, Nemanja Vidic headed the hosts ahead as he was left completely unmarked from the corner, a product of Guardiola’s zonal marking, to get his head on the end of Rooney’s cross and give United the lead.

All United needed to do was hold on and keep Bayern out for the rest of the half to record what would have been an unlikely win. However, Bayern equalised nine minutes later as Rafina crossed the ball deep into the United box, the ball was brought down by Mario Mandzukic and Schweinsteiger thumped the ball into the roof of the United goal, giving Bayern their much needed away goal going into the second leg at the Allianz Arena.

The game began to get a bit scrappy in the latter stages as both sides did whatever they could to try and snatch the lead and take control of the tie. Antonio Valencia was extremely lucky not to be sent off in the 72nd minute as the United winger, already on a yellow, was seen to leave his trailing foot on a tackle.

Bayern proceeded to pile on more pressure as they went searching for a second goal and they almost got it in the 77th minute as Mario Gotze knocked the ball on for Arjen Robben whose chance missed by a whisker. Another chance fell to Robben as Schweinsteiger held onto the ball outside of the United box with some nice footwork to pass the ball onto his Bayern team-mate. In the end, Robben’s shot went wide of the target as it failed to curl, which was lucky for United as the shot left David de Gea rooted to the spot.

With the final minutes dwindling away both sides had settled for a draw, although the drama was not over yet as Bayern Munich had a man sent off in the final minute of the game. Goal hero Schweinsteiger was sent off for a second bookable offence after he took down Wayne Rooney. This, along with a yellow for Javi Martinez, means that Bayern will have to play the second leg without both first-choice midfielders.

United remain underdogs to progress into the next round, but Vidic’s goal will give them hope that if they pull off a massive upset by knocking out Bayern.