Spain Bow Out With A Win 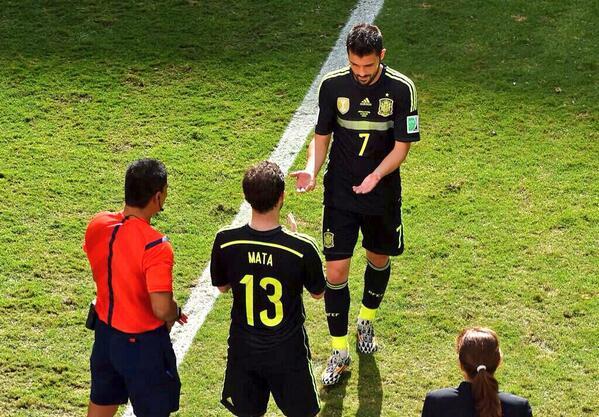 Spain ended their disappointing World Cup defence with a 3-0 win against Australia in Curitiba.

Australia made one change to the side that lost 3-2 to the Netherlands with Adam Taggart coming in for the suspended Tim Cahill. Spain made seven changes to the team that lost 2-0 to Chile; Pepe Reina, Juanfran, Rui Albiol, Santi Cazorla, Koke, David Villa and Fernando Torres came in for Iker Casillas, Cesar Azpilicueta, Javi Martinez, Pedro, Diego Costa, David Silva and Sergio Busquets.

David Villa was taking part in his 97th and final game for Spain, a career that has seen him score 58 goals in his international career before this game. It was also Barcelona playmaker Andres Iniesta’s 100th appearance for Spain and Pepe Reina’s first ever World Cup appearance.

Spain took the lead after 35 minutes when David Villa back-heeled in a low pass from Juanfran into the centre of the goal. This would turn out to be his final international goal, before being subbed off for Juan Mata to come on. Villa was clearly emotional as he sat down on the substitutes bench.

Chelsea’s Fernando Torres made it 2-0 for the World Champions with a cool right-footed effort that went under Matthew Ryan.

Before this game Spain had conceded seven goals, one more than they did on their way to winning Euro 2008, the 2010 World Cup and Euro 2012.

With the greatest respect to these two teams, this wasn’t a classic. It felt like it was a pre tournament friendly with neither side really going for it, and the Spanish didn’t really look interested. Both sides tournaments have now finished and now for Spain it will be all about seeing which players’ international careers are coming to an end, and who should replace them. Australia didn’t play that bad in their three games but they were just going against superior teams. For them, the next decision will be to see how long Tim Cahill and Mark Bresciano have in the international game.