Shambolic Refereeing a Talking Point as Colombia fall to Brazil 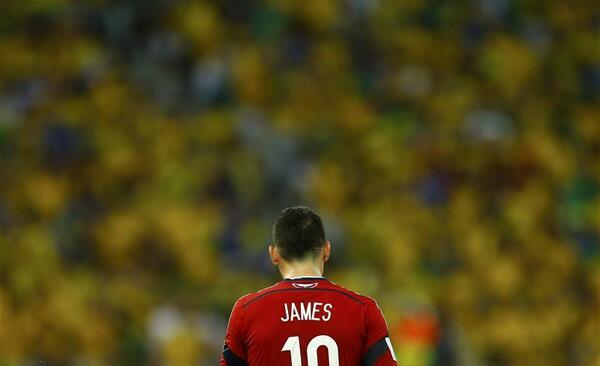 Hi guys, welcome to our report of the second game of the evening! After France’s earlier defeat to Germany, both these sides knew exactly what lay ahead should they advance past this fixture. How much would Brazil miss Gustavo? Would Rodriguez get the better of Neymar? Read on to find out our thoughts on this All South-American quarter-final!

After the emotional state of some of the Brazilians pre-shootout in the Chile game, never mind post-shootout, it was plain to see just how much pressure the Brazilian players are feeling in this tournament; a quick start then was crucial for Brazil, one would think, in order to ease that immense pressure a bit.

The hosts’ start definitely will have had that effect. Dominating the ball early-on, Brazil didn’t really give Colombia a look-in at all as Brazil kept possession and picked their moments in the opening exchanges. Neymar was, as expected, heavily involved as he embarked on a few mazy runs at the defence and also had a pop at goal from a free-kick – it was his run that led to the corner for the opening goal. After anchoring a decent counter-attack about seven minutes in, Neymar earned his side a corner which Thiago Silva was able to tuck away for the opening goal; with equally as unconvincing a contact as David Luiz’s goal in the Chile game.

Colombia had a good chance to reply almost instantly through Juan Cuadrado, who looked lively throughout the game on the flanks for Colombia. He picked up a loose ball on the edge of the box before driving an effort towards the Brazilian goal; a tiny deflection off the thigh of Thiago Silva sent the ball wide but only just. This was the only chance the Group C winners really had in the opening 20 minutes as Brazil were just relentless in attack, looking much more like the team that won the Confederations Cup last summer.

Brazil created a lot of opportunities from second and third phase attacks after corners but were equally as potent in open play and, had things fell their way a bit more in the opening exchanges and had Ospina not been so excellent in goal, they could have been out of sight after 20 minutes. The Colombians were visibly shaken after conceding that goal so early, the immense atmosphere inside the stadium probably had something to do with it too, but they had they first got into their stride in the 21st minute as Cuadrado and Rodriguez led a counter-attack that looked exceptionally dangerous until the defence intercepted the final ball and broke away to go on an attack of their own. The opening 30 minutes was an exhibition of end-to-end football, with Brazil just shading it in terms of chance creation.

Earlier in the week James Rodriguez was quoted as saying he’d perhaps avoid the Premier League for now because of the league’s physicality; Brazil certainly seemed to hear that message loud and clear as every they were coming in hard on the Colombian number 10 at every opportunity, really causing the playmaker, and in turn Colombia, problems. He was still very good, and stood out, but so did it stand out that Brazil were being exceptionally physical towards him.

This was a feature of the match as there were countless fouls littered across both halves but a distinct lack of bookings. For a game that was supposed to be hyped up due to the talents of Neymar, Oscar, Rodriguez and Cuadrado, Fernandino, Paulinho and Guarin were grabbing a lot of attention for their immense, often arguably illegal physicality in the middle of the park; what it was going to take for the ref to step in was anyone’s guess. He was blowing his whistle quite frequently but it was just like breaking up a clinch in a boxing match, soon enough both sides were throwing haymakers at each other again – a card needed to be brandished!

The second half continued in the same manner but Colombia were much more prominent in Brazil’s defensive third this time around. The physicality hadn’t slowed up at all; if anything it had got worse but the referee was completely resistant to pulling out a card until after the hour mark. After a pretty solid body-check on the Brazilian left flank, Neymar was taken out by a full-back but no booking was given. Thiago Silva was then given one for cutting across, or trying to win the ball from the goalkeeper and fouling him in the process (meaning he would miss Brazil’s next match, if they progressed). The cruellest of punishments though came soon afterwards as James Rodriguez, who was kicked and kicked and kicked throughout this match by the Brazilians, was booked by the referee after what, I think, was his first foul of the match – albeit a rather strong one on Hulk.

What came next though, was even crueller; from the free-kick that Rodriguez conceded, Brazil doubled their lead. Who scored it? None other than David Luiz, with an effort that anyone would have been proud of – Cristiano Ronaldo-esque. Certainly a contender for goal of the tournament. Colombia were pretty furious, and rightly so; it was definitely a free-kick but some of the fouls on the Colombians, or even just Rodriguez, that hadn’t been given in this match tonight were far worse.

Nonetheless though, with 15 minutes to go the Colombians kept plugging away and, very admirably after all the abuse he’d suffered at the hands of the Brazilians, James Rodriguez was at the forefront of all their good work. Just as the commentary team were saying the Colombians hadn’t tested the Brazilian goalkeeper enough, they picked the defence apart instantly and had themselves a penalty as Cesar completely took Bacca out. With a chance for a bit of justice, Rodriguez stepped up and took the penalty and buried it into the bottom corner, sending the keeper the wrong way before picking the ball out of the net to keep Colombia’s momentum going.

Suddenly the atmosphere was very different inside the stadium as what earlier sounded like utter confidence from the home fans soon sounded like a very distressing racket. Colombia were completely in control in the immediate aftermath of the penalty as Brazil were hounded off the ball within seconds of them winning it. Things went from bad to worse for Brazil as not only were they penned back into their own half by the Colombians but Neymar was also stretchered off very late on to leave Brazil fans looking very concerned, not just for the remainder of this game, but how they’d cope without their superstar if he wasn’t fit should they get through.

Colombia kept up the pressure right into the five minutes of added time but they didn’t get the goal they’d need to take it to extra time! Brazil progress to the semi-finals where they’ll meet Germany in a fight for a place in the final. If the refereeing is anything like it was tonight, it could well be a fight! The refereeing was borderline dangerous; credit where it’s due – Colombia have been excellent in this year’s tournament and have been a breath of fresh air but you have to wonder what could have been had they had a better referee; Brazil advance nonetheless – stick with us to see how they get on against Germany in the next round!