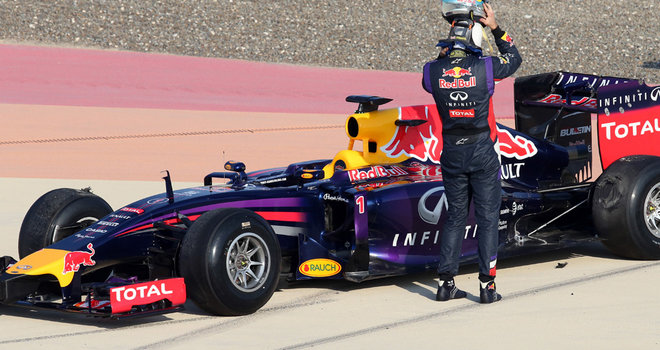 Red Bull cannot catch a break at the moment it seems. The 2013 world champions endured another disastrous first test in Bahrain as Sebastian Vettel’s car lasted only 14 laps before the four-time world champion’s car broke down.

After their poor showing in the first pre-season testing in Jerez, Red Bull had planned to come into these tests on a level playing ground with the other nine teams who tested at Jerez; all of whom got through the four days in Spain relatively problem free. However, this would not be the case as they were delayed getting onto the track by five hours after difficulties in putting the car together.

The problems in Jerez had reportedly been down to overheating problems, the team have been quick to deny that today’s problems are related to those that plagued them in Jerez. Although, the car that stopped today had an apparent burning smell coming from it when it returned to the pit on the back of the lorry which does suggest that they have not overcome their overheating problems.

Lotus, the only team who didn’t test in Spain finally lifted the covers on their new car. The E22, a car which I like to call the ‘Mammoth’ down to its interesting nose design debuting with Romain Grosjean behind the wheel. Sadly they only lasted eight laps as software and battery problems cut their first run of 2014 short.

Ferrari maintained their good pre-season testing, although Fernando Alonso experienced smoke pouring from the back of his F14 T.  A ‘fuel mix’ problem was diagnosed and Alonso was soon back on track and went on to record the day’s second quickest time.

The other Ferrari powered teams had mixed fortunes as Force India’s Nico Hulkenberg recorded the fastest time of the day and managed to do 78 laps, the second highest behind Mclaren’s Kevin Magnussen. Marussia only managed to get three laps out of their car and they failed to register a time.

Mercedes, with Lewis Hamilton behind the wheel had a typically good day at testing. They managed to record 74 laps without any problems and record the third fastest time of the day, thus cementing their status as early favourites to end the Red Bull’s dominance this year.