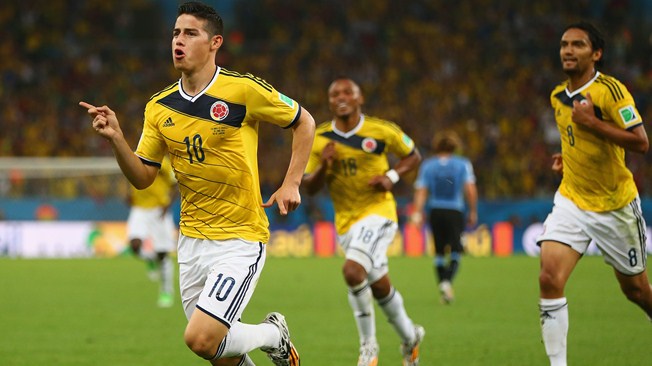 Suarez began his 4 month ban from football as punishment for biting Chiellini. Uruguay were without their talisman whose goals sunk England but with Forlan replacing him they have plenty of international pedigree. Colombia will be looking to play with them same joy that have them many peoples second team and certainly here at Fortitude we’re big fans.

Uruguay will be looking to recreate their group form against England and Italy and soak up the pressure and break on the counter attack and with Cavani and Forlan they’ve certainly got goals in the team. The opening of the game saw Colombia cause the Uruguayans issues with their running and willingness to work tirelessly for each other. Both teams looked clearly aware of the pressure right from the off, and so both teams were happy to just break up the other teams play and not let momentum build. Armero of Colombia continued his group stage form and the marauding runs have now become an expected feature of his game. James Rodriguez broke the Uruguayan resistance after much penetration and made it 1-0 to Colombia, with his 4th goal and in his 4th game. It was one of the contenders for goal of the tournament so far and is bound to increase the interest that currently surrounds the Monaco man. In the first half Uruguay looked happy to sit back and allow the Colombians to attack them. In an attacking sense Uruguay showed very little in the match and Diego Forlan showed his increasing age as he looked a shadow of his European Golden Boot winning former self. The statistics don’t lie, of the 16 shots they had only 4 of them were on target.

James Rodriguez scored his and Colombia’s second goal of the game, and that meant that Uruguay’s hopes of finding passage to the quarter finals were more or less dead in the water. It was a right-footed effort from very close range and saw an assist come in the form of a headed pass and once again we saw the smooth moves that we have all come to associate with Columbia.