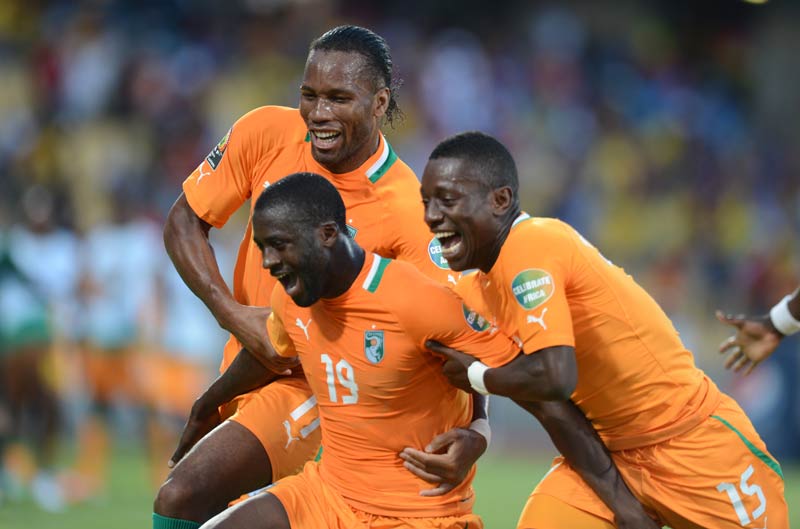 Two quick goals from Wilfried Bony and Gervinho gave Ivory Coast Victor over Japan as they came from behind to win 2-1 in their Opening Group C Game.

With the earlier game between Greece and Colombia ending 3-0 to the South American side, both teams knew that getting 3 points was vital for trying to get out the group as winners and potentially getting the easier side in the round of 16.

Ivory Coast decided to not start with their Talismanic striker and Chelsea legend Didier Drogba, who has currently been linked with a move to Juventus this summer. He started on the bench a long side Liverpool defender Kolo Toure. Manchester United cast away Shinji Kagawa started for Japan as well as AC Milan defender Keisuke Honda and Uchida, who has been liked with a move to Arsenal over the summer.

The opening stages of the game were dominated by Ivory Coast as they looked to assert their authority on the game and grab an early goal to settle the nerves, and they almost came close early on in the game. Roma winger Gervinho using his pace to get up the right side of the pitch before cutting in and crossing the ball to Wilfried Bony, whos shot was wide of the mark.

It was Japan however who opened the scoring when after a few minutes of pressure on the Ivory Coast defence saw Keisuke Honda receive the ball just out side of the box. The AC Milan Midfielder drilled the ball to the near post, not giving the Ivorian keeper a chance.

After the goal, Japan had a spring in their step as they pushed for a 2nd goal to extent their lead. Uchida almost doubling their lead with a well taken shot, but it was straight at the keeper, leaving Tiote to clear the ball from danger.

Next it was the Ivory Coast’s turn to try and get one back as they pressurised the Japanese defence, causing them to give away a free kick out side of their box which Yaya Toure was unable to convert. The Manchester City Midfielder however was causing the Japanese defence all sorts of problems as his powerful runs often saw him end up deep into the box.

Japan’s best chance to double their lead came late into the 1st half as goalscorer Keisuke Honda went on a mesmerising run through the Ivorian defence with some nifty footwork, only for his shot to be deflected over the goal. At the other end Ex-Chelsea man Kalou blew a great chance to level the game right before half time as his header went miles wide of the goal. The Lile Striker was left looking evidently frustrated at his miss.

Going into the 2nd half, The Ivory Coast looked much the better side as they pushed for the equalizing goal. Wilfried Bony coming close in the early stages of the half as he was at the end of a Serge Aurier cross. His header however didn’t faze the keeper.

Later into the half, there were calls for a penalty as Yaya Toure was brought down in the box. However the ref deemed it that he went down a little too easily and waved off the protests as The Ivory Coast continued to pile on the pressure and push for the Equalizing goal. Kalou came close as he went through the Japanese defence completely unchallenged only for his shot to go wide, not even challenging Kawashima in the Japanese goal.

With time running out Serey made way for Didier Drogba, who seemed to breath a new lease of life into the game as he imposed himself onto the game the second he came on. He made an instant impact as he rushed into Japan box and knocked ball to Gervinho only for chance to come to nothing.

Minutes later Ivory Coast finally got the goal they were looking for as Arsenal target, Serge Aurier put in a quality cross into the box that as met by Wilfried Bony, who’s diving header left Kawashima helplessly flailing for the ball. Minutes later they doubled their lead as again, Serge Aurier put another quality cross into the goal area and this time it was met with the head of Gervinho. Kawashima got a hand to the ball this time but it wasn’t enough to keep his side level.

Toward the latter stages of the game, Japan failed to create any clear cut chances to draw the game level again as the Ivory Coast were more than happy to knock the ball about and see the game out. Japan’s only chance coming after a long string of passes around the Ivory Coast box, but at the it lead to a limp deflected shot that was never going to cause the keeper any great deal of stress.

With a 2-1 win, that puts the Ivory Coast in a good position to get out of the group and continue their impressive World Cup Record.