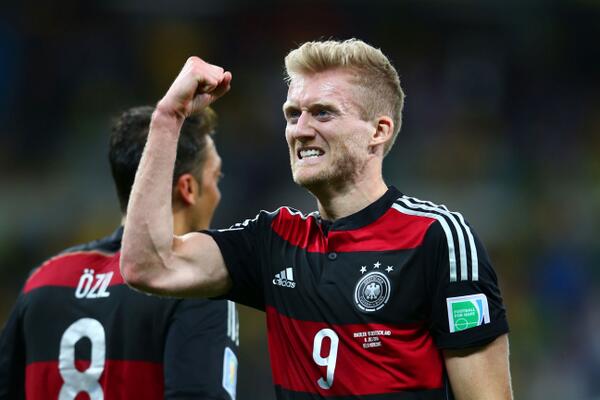 Hello and welcome to our coverage of the first semi-final of this (so far) exhilarating World Cup tournament; tonight’s clash saw Germany take on the hosts, Brazil, in Belo Horizonte. As has been the story throughout the knockout rounds, each side had glaring weaknesses for others to exploit: Germany’s being their lack of pace and organisation (although moving Lahm back into defence has helped with the latter, at least) at the back and Brazil’s, among others, being the enormous amount of pressure on them and no recognised leader to bare it. Talk of Neymar and Thiago Silva’s absence for Brazil littered the Twitter-sphere and newspapers alike; some thought Neymar being out would benefit the Brazilians as it would give them more natural shape whereas others thought exactly the opposite. Who was right? Read on to find out!

Brazil, carrying a Neymar jersey whilst singing their anthem, started the brighter of the two sides in this match. Oscar, looking much more comfortable in the number 10 role than he had done in his previous roles in the tournament, was at the centre of Brazil’s offensive play in the opening three or four minutes but was also chasing the ball down well when out of possession. Germany eased into the game and, thanks in no small part to the holding midfield duo of Schweinsteiger and Khedira, soon took control and really capitalised on the nervousness that the likes of Dante and, even occasionally, David Luiz were showing at the back.

Had the Germans had a bit more luck with their final ball, or made some better decisions in the final third, they might have gone ahead much sooner than they did; even when they did get the breakthrough though, it only took just over 10 minutes. Similar to their quarter-final goal, Germany’s opener in this game came from a corner – you may remember from that goal though that Hummels had to fight his way past Varane to get to the ball – this goal wasn’t like that at all. Müller, who started stood in the usual cluster of players just outside the near side of the six-yard box, was allowed to wonder free of all defenders into space and volley Kroos’ delivery into the back of the net – absolutely atrocious defending.

Surely Brazil would respond, you’d have thought; I thought that too! It didn’t happen though – nerves soon turned to panic and desperation as the Germans smelt blood and went for the jugular. Building on the good work that Germany’s holding duo were doing in suffocating Brazil’s attacks through the middle, added to Brazil’s lack of a real threatening presence down the flanks, Germany soon had it all their own way – Brazil desperately needed a leader and no-one stepped up to the plate.

What was to follow as a result of this was simply staggering. After 22 minutes the floodgates opened, and fittingly so after what was such a staggering team performance, one of the greatest German footballers in World Cup history netted the Europeans’ second goal. On the edge of Brazil’s defensive third, Müller played a pass inside from the wing towards Kroos; Fernandinho tried to intercept but failed miserably, leaving a massive gap for Kroos to return the pass to Müller who was running across goal. Müller then picked out Klose who was running the opposite way; he had one shot blocked but picked up the rebound and tucked away the finish to become the all-time leading World Cup goal-scorer, eclipsing Ronaldo’s record.

Kroos, who had been much more lively in this game than he had been in the quarter-finals against France, soon got his reward for his good play as he notched Germany’s third of the game. A calamity of errors led to the goal as Ozil started the move with Lahm on one flank before crossing the ball – a ball which was allowed to find its way across the entire box without anyone sticking a foot in – into the path of Kroos who was waiting on the edge of the box to dart his half-volley into the bottom corner. Kroos then grabbed Germany’s fourth too as he caught Fernandinho in possession before playing a give-and-go with the excellent Khedira and tucking away the finish for Germany’s fourth goal. Four goals in 25 minutes, and Germany weren’t done. Yet another defensive mistake, as David Luiz let his hot-headed nature get the better of him, saw the defender overcommit to a challenge on Sami Khedira, which he didn’t win, before Khedira played a give-and-go of his own with Ozil to tuck away Germany’s fifth. Khedira doesn’t score very often but for the leadership he and Schweinsteiger had given Germany in this first half, he at least deserved one.

This relentless tempo couldn’t be kept up as Germany were happy, believe it or not, to just grind out the half whereas Brazil had no idea what had hit them; Scolari made two changes at halftime but will have surely been wishing that he could have made 11. Brazil, again for a very brief period of time, made a very bright start to the half, testing Neuer on three separate occasions in the opening 10 minutes but the German was equal to the challenges wherever they came from. Germany soon took Klose off for Schurrle before moving into the false-nine formation they’d used so frequently throughout the tournament to this point and were quite happy to slow the pace of the game down, sit back and play on the counter-attack. Their job was done after half an hour of this match so who could blame them?

Schurrle soon picked up where his countrymen had left off in the first half as he had the ball in the back of the net just before the seventy minute mark. Trying to explain the detail with the goals in this game has become slightly tiresome as every single one of them has been a result of Brazil being broken down far too easily followed by some seriously poor marking and a relatively straightforward finish (as far as finishes in a World Cup semi-final go) and that was exactly the case with this one too as David Luiz, again, completely left his man and Germany had their sixth. I’d like to make it sound like Brazil were broken down by some magic but they weren’t, they were broken down by their own lack of discipline and awareness.

Germany’s seventh, yes you read that right, seventh goal was actually the result of some sheer individual brilliance as Schurrle grabbed his second of the game after someone, I won’t name names (David Luiz), left him completely unmarked when running onto Müller’s flick from a throw-in before he charged his way into the box and smashed the ball home from an impossible angle, his shot crashing off the crossbar and into the far corner!

Applause was now breaking out around the ground for this German side and the Brazilian fans were even mocking their own team with Ole chants as the Germans starved the hosts of possession. Germany had a chance for their eighth but Ozil fluffed it; useless these Germans are, right?! Brazil then went straight down the other end and scored through Oscar but hardly anyone in the stadium seemed to take it seriously, except for the Germans who were livid at conceding one goal – if only the Brazilians had shown so much fight!

Germany became the first team ever to score 7 goals in a World Cup semi-final – against Brazil no less.  I think that tells you all you need to know about this game – join us tomorrow for the report on Holland’s clash with Argentina, if this results has sunk in by then!