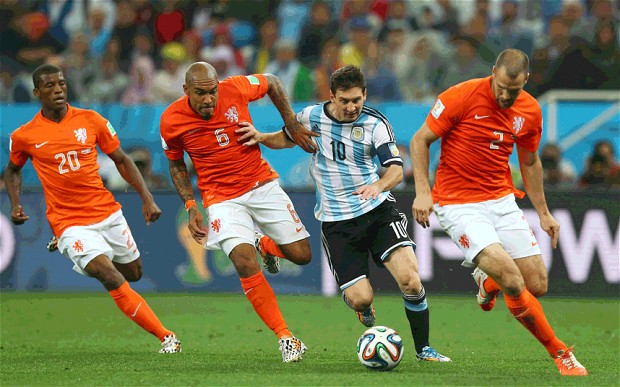 It wasn’t an instant classic but after 120 agonisingly slow minutes, Argentina booked their place in the 2014 World Cup final after a 4-2 win on penalties against a below par Netherlands side.

Unsurprisingly, this game started a lot tighter as neither side gave an inch and it wasn’t a goal-fest like Germany’s 7-1 destruction of the hosts Brazil. During the ninety minutes, there weren’t that many chance to talk about. In the first half, Lionel Messi had a low free kick comfortably saved by Jasper Cillessen and Ezequiel Garay put his header just over the bar.

The biggest chance of the game came from Argentina’s Gonzalo Higuain as he beat the offside trap in the 75th and poked the ball into the side netting, fooling the Argentine fans who had thought that the ball had go in the goal.

The Netherlands finally got their first shot on target eight minutes into the first half of extra time as Bayern Munich’s Arjen Robben shot from well outside the eighteen yard box and it didn’t really test the Argentine keeper Sergio Romero. The Dutch also made their usual extra time substitution as they brought on the Schalke 04 centre forward Klaas-Jan Huntelaar for captain Robin Van Persie. The 30 year old Dutchman Huntelaar has proven to be a super sub at this years tournament as he got the winning goal against Mexico in the Round of 16.

Late on in extra time, Argentina and in particular Rodrigo Palacio and Maxi Rodriguez squandered huge chances to win it for their side but both chances easily went into the hands of Jasper Cillessen.

During the dreaded penalties, Aston Villa’s Ron Vlaar, who had a stellar game during normal and extra time, was the first man to step out and had the misfortune of having his effort saved by Sergio Romero. Lionel Messi took the responsibility of taking Argentina’s first effort and confidently tucked it away in the bottom corner. At a score of 2-1 to Argentina, Wesley Sneijder was the next man to step up and see his effort saved as the ball was at a perfect height for Romero to push it away and he did. At 3-2, it was down to former Liverpool midfielder Maxi Rodriguez to win it for Argentina and he put it away, even though Jasper Cillessen got a hand to it but that wasn’t enough.

The Netherlands had some luck as Robin Van Persie and Nigel de Jong both were ruled fit to start after being doubts before kick off. Ten days ago, de Jong was ruled out of the tournament but amazingly managed to gain some fitness in time. Jasper Cillessen was again picked to start in goal by Louis van Gaal. Cillessen was infamously substituted during extra time in the Netherland’s win against Costa Rica as Newcastle United goalkeeper Tim Krul came off the bench to face the penalties, and saved two of them. Argentina made two changes as Enzo Perez came in for the injured Angel Di Maria and left back Marcos Rojo came back into the starting eleven after serving a suspension ban.

The two have faced each other four times before this encounter with the Netherlands winning two of them and Argentina winning one of them. They first met in the World Cup in 1974, when Johan Cruyff scored a brace in his side’s 4-0 win. Argentina then got their victory back in the biggest way possible, as they beat the Dutch to win the 1978 World cup on home soil. At France ’98, they met in the quarter finals and Dennis Bergkamp scored one of his most iconic goals as his last minute wonder goal meant that he had sealed his side’s qualification to the semi finals in Marseille. Their final encounter was eight years ago at the 2006 World Cup in Germany was a goalless draw in the Group Stages.

It was a cruel way for the Netherlands to fail to get to the World Cup but it wasn’t a great performance from a side who started the tournament by decimating the world champion’s Spain. Saying that, Argentina were not any better and haven’t played the greatest football in the world, but they have made it to the World Cup final. Louis Van Gaal will bow out of being the Dutch head coach before officially taking over at Manchester United by playing in the third/fourth play off against the hosts Brazil on Saturday.

Argentina will now be preparing for Sunday’s clash against a strong German outfit at the world famous Estadio Maracana. Will Messi cement his legacy or will Germany rule the footballing world again?