Below Par England Lose in Antigua 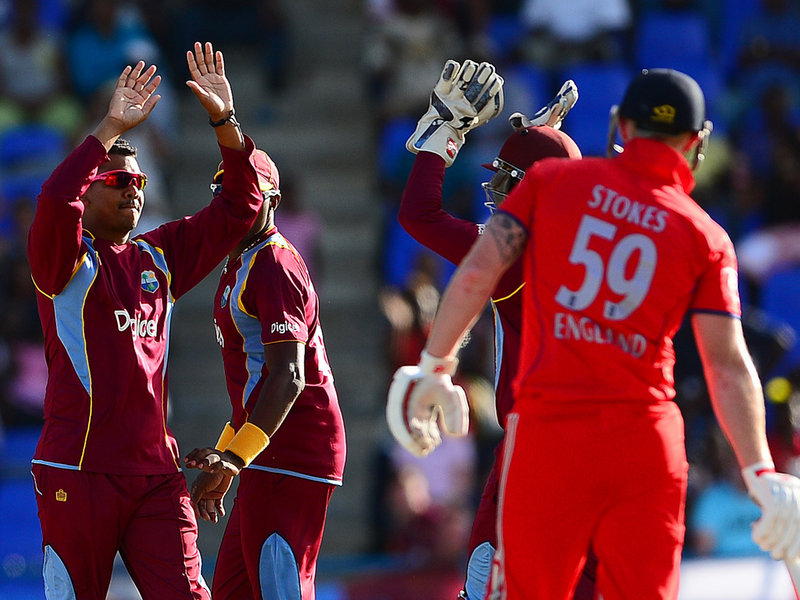 A new era for England began with a disappointing loss at the Sir Vivian Richards Stadium in Antigua.

This marked the first match that England have played since the Ashes series, and the first series since Kevin Pietersen was told he had no future for England. It also marked the first game without Andy Flower in the England management set-up. Stuart Broad won England the toss and they elected to bowl.

The West Indies came into this series after a less than convincing T20 series draw against minnow Ireland and a win in the only ODI against Ireland. They were still without key men Chris Gayle and Marlon Samuels. The visitors won their only warm-up game against the Uni of West Indies Vice Chancellor’s XI by 29 runs after Joe Root hit an unbeaten century.

England were without Alex Hales who missed out due to a thigh strain and Irishman Eoin Morgan missed out due to a bruised knee. This handed debuts to Nottinghamshire’s Michael Lumb and Worcestershire’s Mooen Ali. Lumb has been a regular fixture in the T20 side of England’s team but this is Ali’s first ever experience of full international cricket. Ravi Bopara made his 100th appearance for England. Due to the number of injuries England have picked up so far, former England captain and now assistant coach Paul Collingwood was selected to be a 12th man but wasn’t needed.

It took until the seventh over for England to make the breakthrough as Chris Jordan caught low to his right one handedly to dismiss Kieran Powell, giving Joe Root his first wicket of the innings. England got the second wicket after James Tredwell’s bowl took a big inside edge from Dwayne Smith and it bounced off his pad and into the hands of Jos Buttler. The umpire didn’t give it at first but after England’s review, TV umpire Rod Tucker give it out and Smith went for 24.

By the 16 over mark, the home side were in trouble at 45-4 after Tim Bresnan bowled Kirk Edwards after the Barbados-born man inside edged the ball onto his off stump, and debutant Moeen Ali got Darren Bravo out leg before wicket for just two runs. England’s early success with the ball all came from Stuart Broad’s decision to use spinners instead of pace bowlers, with Tredwell, Root and Ali all picking up wickets.

The partnership of skipper Dwayne Bravo and Lendl Simmons slowly steadied the ship for West Indies and got them up to a score of 153 and a strong partnership of over 100. It all came to an end for the partnership as Lendl Simmons scuffed Tim Bresnan’s delivery up in the air and Moeen Ali truly delivered by taking the catch. Simmons impressed with the bat reaching his half century by scoring 65 runs off 94 balls.

West Indies went on a free for all as skipper Dwayne Bravo eventually scored 87 off 91 balls as he shared another 100 partnership with big hitting Darren Sammy who hit an impressive 61 off 36 balls. Sammy eventually got caught on the final ball of the innings as Stuart Broad took a catch from Tim Bresnan’s bowling. Bresnan got figures of 3-68 from 10 overs.

Stuart Broad will need to work on his bowling tactics as his bowlers took a pounding at the hands of West Indies middle order batsmen. In particular, Chris Jordan took the majority of the battering. He ended up with figures of 0-67 and consistently bowled wides. The pick of England’s bowlers was James Tredwell got figures of 1-23 off 10 overs.

England should have executed the West Indies when they were 45-4 and with poor bowling, they ended up having to try and get a big total of 270.

England started the chase very well with debutants Michael Lumb and Moeen Ali making an impressive 96 between them before Moeen Ali fell six short of making his maiden half century. The Worcester man Ali scooped a Dwayne Smith ball into the hands of Sunil Narine. Ali was dropped whilst on 36 by Dwayne Smith, but could only add eight runs to his title. Michael Lumb however did get his maiden half century. Lumb was given out for LBW earlier in the innings but successfully reviewed the decision and the video technology proved he had hit the ball before it went onto the pad. 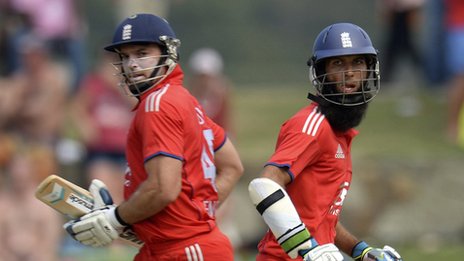 Luke Wright failed to capitalise on England’s good start as he lashed out at a Darren Sammy bowl and Dwayne Bravo easily caught the bowl to leave England at 106-2.

Lumb continued to progress with his total and became the second Englishman in ODI history to score a century on debut. Lumb’s great innings came to end when he was caught by Dwayne Bravo off the bowling of Ravi Rampaul.

England lost three wickets for just over 20 runs with Ben Stokes being bowled for five, Joe Root being caught by Sunil Narine for 37 and Jos Buttler being caught by Jason Holder for 12.

England didn’t do enough and only scored 254 from their allotted 50 overs and lost by 15 runs, much to the delight of the home crowd.

West Indies, led by England’s former bowling coach Otis Gibson, will be pleased with their convincing win over a sluggish England side, who didn’t put the game to bed when they should have. The only saving graces for England were that the two debutants Michael Lumb and Moeen Ali both performed well with the bat and Ali also picked up a wicket.

The England side had a real lack of experience in ODI cricket with the openers Ali and Lumb playing their first game and Buttler, Root, Stokes, Jordan and even 32 year old James Tredwell still in the early stages of their international careers.

England will be looking to step up in their next ODI game against the Windies in Antigua.