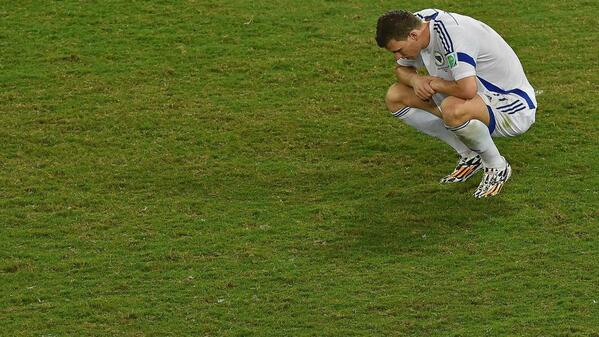 A single Nigerian goal from veteran striker Peter Odemwingie gave Nigeria a vital 1-0 win and three massive points in Group F. This 1-0 win meant that World Cup newcomers Bosnia-Hercegovina went crashing out at the first stage and Nigeria won their first game since France ’98. Before this clash, they had a World Cup record of losing six of their last nine games.

Nigeria took the lead just before the half-hour mark when Emmanuel Eminike out-battled Emir Spahic and put in a low cross that was met by Stoke City striker Peter Odemwingie; the former West Brom and Cardiff man met it and put the ball through the legs of his Stoke team-mate Asmir Begovic to give put the African side ahead.

The first half was pretty even with both sides having plenty of half-chances. Bosnia thought that they had taken the lead after Edin Dzeko went one on one with Vincent Enyeama and beat him from around 12 yards out, but the goal was disallowed for offside. However, the linesman from New Zealand got it wrong and Dzeko was a yard or so onside and the goal should have stood.

With just three minutes of stoppage time, Bosnia threw everything at the game and Edin Dzeko had the chance to become a Bosnian legend. His first effort was a header that was comfortably saved by Vincent Enyeama, and the second one came with just 40 seconds left in the game where Dzeko appeared to bring the ball down with his hand and lets loose to a rather tame effort that Enyeama pushed onto the post to safety.

Nigeria now go into their final group game against Argentine knowing they need to avoid losing to qualify. For Bosnia, it’s just about enjoying their final adventure at this years World Cup against Iran,, who need to win their final game.