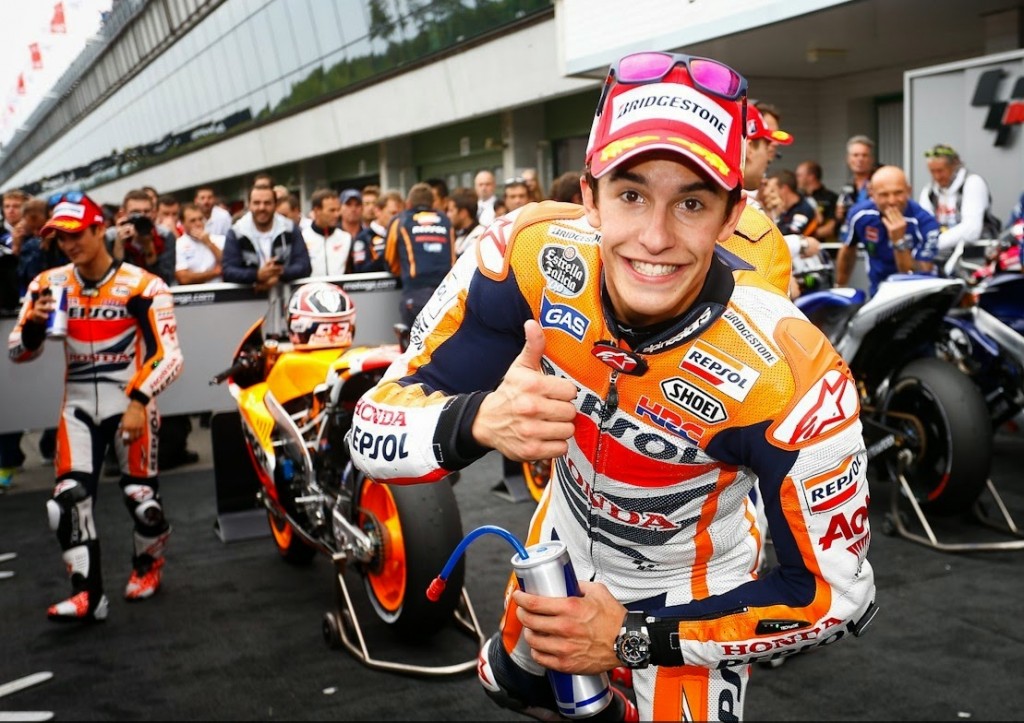 The start to MotoGP season started in style at the annual Qatar Grand Prix. There were spills, overtaking and late retirements…essentially the sport was back with a bang in 2014.

The first casualty of the year was the former two time World Champion Jorge Lorenzo as he touched the white line whilst breaking and dropped the bike down, retiring in the first lap of the race. The Spaniard Lorenzo won last years Qatar GP ahead of Valentino Rossi and Marc Marquez.

Capitalising on Lorenzo’s downfall was the German Stefan Bradl who looked comfortable in the lead until he also crashed out.

There was a real tussle between the master and the young star as Marc Marquez and Valentino Rossi battled to the end repeatedly overtaking each other, with this happening for the majority of the race. But it was the World Champion Marquez who stayed ahead of the former nine-time World Champion Rossi to claim the first win of the 2014 season.

Defending champion Marc Marquez started the race from pole position after sneaking in front of Gresini Honda rider Alvaro Bautista. They were joined by 23-year-old British hopeful Bradley Smith, as the Oxford born rider qualified in third position, edging Ducati man Andrea Dovizioso onto the front row of the grid.

It was a disappointing qualifying session for three former World Champions; Valentino Rossi, Nicky Hayden and Colin Edwards as they finished in 10th, 13th and 14th respecitvely, but it didn’t matter as Rossi claimed second place in Qatar for the second year in a row. It was fine performance by the man known as “The Doctor” as he described his bike as the slowest one that he’d ever been on.

There was real drama late on in the race as British man Bradley Smith crashed out late on whilst he was in fifth. It capped off an unlucky evening for his Tech 3 Yamaha team as his team mate Pol Espargaro retired. Smith was on the verge of beating his best finish in the top class of MotoGP.

Smith, who started the race from third, was doing well until he unfortunately crashed late on.

The ending also saw Alvaro Bautista, who was a constant threat to the front five riders, crash late on. Bautista had been battling with the man who finished in third place, Dani Pedrosa, before his crash with a couple of laps left.

Young Spaniard Aleix Espargaro also impressed from ninth on the grid by finishing just outside the rostrum in fourth position.

Northern Irishman Michael Laverty struggled on his PBM Aprilia picking up a 10 second penalty for jumping starting the lights at the start of the race.

But it was Marquez’s day as he picked up his first 25 points on his quest to retain his World Championship crown.