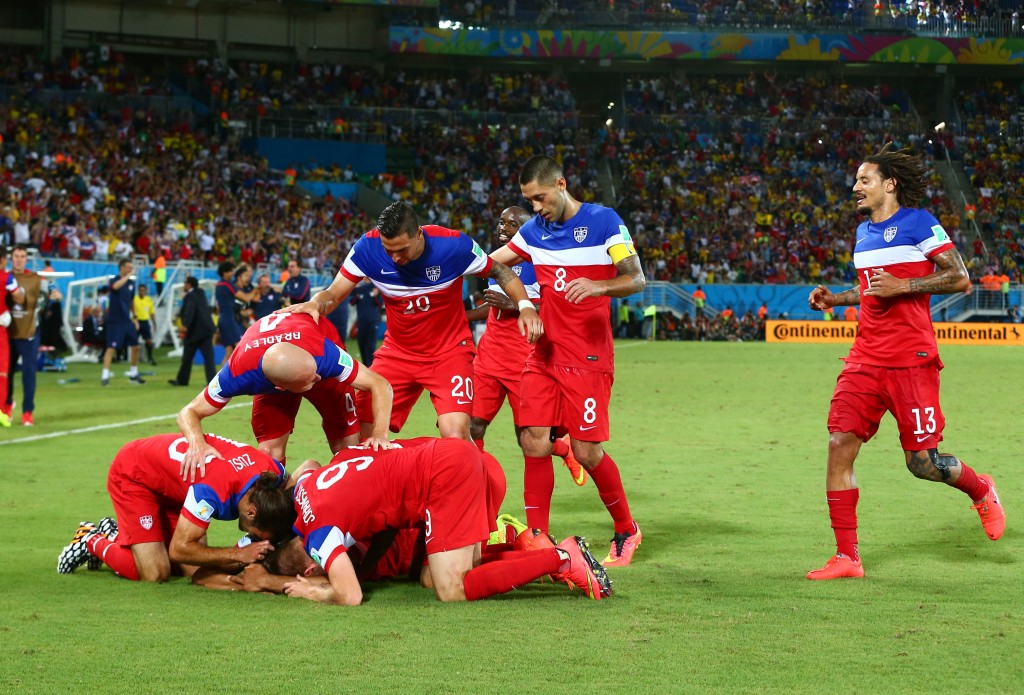 German-born John Brooks scored his first goal for the United States as they overcame a spirited Ghana side 2-1 in their opening game of the World Cup.

The 21 year old, who was also the tallest man on the pitch at 6ft 4in, lost his marker in the 18 yard box and rose to head past Ghanaian ‘keeper Larsen Kwarasey just minutes after Ghana had scored an equaliser and were looking the most dangerous of the two teams.

After previously witnessing a bore draw in Group F between Iran and Nigeria, this match was never going to disappoint, especially with German legend Jurgen Klinsmann leading the US team into battle.

It was a lightning fast start from the USA as Clint Dempsey drove into the Ghanaian box and neatly tucked the ball into the far side of the goal with only 31 seconds on the clock. The goal was not only the 5th fastest goal in World Cup history but also made Dempsey the first American to score in three World Cup tournaments.

There were numerous chances for both teams in the first half but the quality in the final third was proved to be lacking as USA and Sunderland striker Jozy Altidore received the ball 12 yards out but was unable to get it out of his feet before Ghana were able to clear. This was to be his last chance as moments later in a race down the left flank with Ghana’s John Boye, Altidore pulled up sharply clutching his hamstring, which is likely to rule him out for the rest of the World Cup.

Asamoah Gyan had a couple of chances to bring Ghana level before the break, wasting one but forcing a decent save from Everton ‘keeper Tim Howard. USA held on despite five minutes of stoppage time for an accidental clash between Boye’s shin and Dempsey’s nose, leaving the latter bloodied.

After the break, Ghana continued to up the pressure on the United States, but again were not showing enough quality in the final third as Gyan wasted yet another header that ought to have been on target followed by Sulley Muntari striking marginally wide from 25 yards out.

The USA were visibly beginning to tire however, and it was only a matter of time before the Ghanaians broke them down. André Ayew linked up with Gyan nicely with the former slipping the ball past Howard at his near post and it looked as if it could only go one way with the Ghanaians fired up with only nine minutes of normal time remaining.

However, the US team had not read the script and fantastic energy from the tired legs of Fabian Johnson earned them a corner with just three minutes remaining. It was a perfect delivery from substitute Graham Zusi and Brooks finished the move, and the Ghanaians, off with his header that sent the thousands of Americans in the stands into euphoria.

It looks a long way back for Ghana now as their remaining two games come against Germany and Portugal.