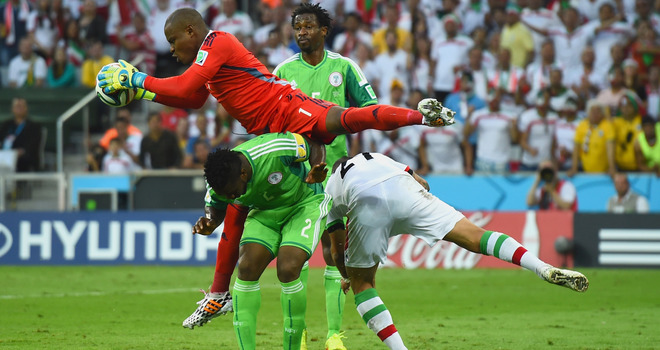 The African champions were held to a goalless draw by Iran at the Arena da Baixada in a game that saw very little chances from both sides.

Former Manchester United assistant manager Carlos Queiroz’s Iran team continued their impressive run of clean sheets, boasting the most clean sheets out of any of the qualifying teams. However, Nigeria were very tame in the final third despite a strike-force littered with Premier League players including Peter Odemwingie, Victor Moses and Shola Ameobi.

It was Iran with the best chance of the first half when Reza Ghoochannejad’s header forced a fine save from Super Eagles ‘keeper Vincent Enyeama. Ogenyi Onazi went close for Nigeria but couldn’t direct his shot on target.

Chances in the second half were few and far between in a largely disappointing encounter. Onazi was able to hit the target as he drilled his shot low but the Iranian goalkeeper was able to deal with the strike comfortably.

The stadium understandably echoed with boos as the referee blew the final whistle and will leave both Argentina and Bosnia and Herzegovina confident of qualifying from Group F.