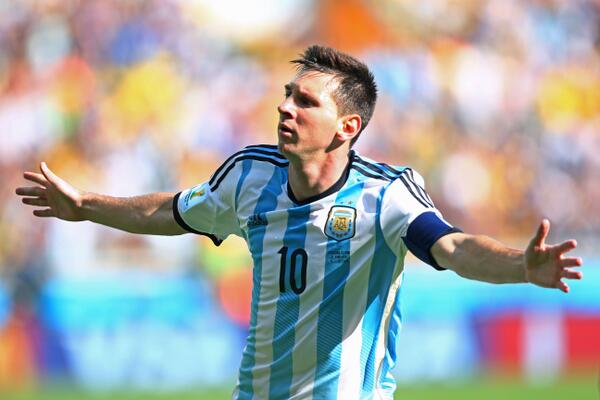 How do you stop a team featuring Messi, Higuain and Aguero? A team with so many attacking talents they left Tevez at home (or at Disneyland if some reports are to believed) and it didn’t look like a mistake? Quite simply you defend, and that is what Iran did for 90 minutes. However, cometh the hour cometh the man, up steps Lionel Messi. 1-0 Argentina.

Jalal Hosseini had the first chance of the match, a free-kick that went wide. Then Man City full-back Pablo Zabeleta galloped forward and found Manchester City team-mate Sergio Aguero with a slick pass to feet. Aguero beat one man with a great bodyswerve but Iran showed what was to come throughout the match and were able to close down the Man City finisher. The move summed up the opening 10 minutes for Argentina front man who found himself being closed down every time he tried to get the ball and found himself working very hard on the channels to manufacture himself some space but a positive for the Argentines was that himself and Messi were able to link up well together.

Fernando Gago and Javier Mascherano were in total control of the midfield, and given the fact it was Mascherano’s 100th cap for Argentina it was hardly a surprise. They completed every pass they attempted in the opening stages. 11 minutes in saw Argentina with their first clear cut chance of the match; Angel Di Maria got to the byeline on the left wing and whipped in a great cross which Gonzalo Higuain almost gets on the end of, before Lionel Messi cut in onto his left foot but saw his shot blocked by an Iranian. Gonzalo Higuain was the focal point of the Argentine attack, but at times there were six or seven men up front.

Iran wn a corner – and it almost cost them a goal. Like France last night, Argentina won the header and were suddenly away. They had a five-on-four break which they worked slickly across the pitch, but a slack touch from Gonzalo Higuain let him down and the chance came to nothing.

Gonzalo Higuain received the ball inside the area, he laid it back to Sergio Aguero who curled it around Angel Di Maria and toward the top corner, only for Alireza Haghighi to make a flying save. Angel Di Maria burst clear this time but couldn’t get a telling connection on his ball across and it was turned away for another corner which came to nothing but it was looking increasingly easy for the favourites and a goal seemed to be on its way. Lionel Messi was dropping deeper and deeper to get on the ball, often coming out to the right-hand side behind Pablo Zabaleta.

Lionel Messi, back in the middle from the flank, won a free-kick in a good area. He fizzed the ball over the wall and just over the bar. Argentina again threatened from a set-piece as Lionel Messi picked out Ezequiel Garay at the back stick, but his header looped over the crossbar from close range. Jalal Hosseini headed over from a corner. Argentina looked dodgy defending set-pieces, Iran almost snuck a goal totally against the run of play.

Iran broke with intent for the first time, they had an overload on the right and the cross picked out your man Reza Ghoochannejhad in the middle, but his header was well saved by Sergio Romero. Iran were growing in confidence now, moving the ball well and keeping it for periods of time for the first time. It was all Iran now as Fulham man Ashkan Dejagah was only denied the opener by a brilliant save from Sergio Romero, his header was flying in until the Monaco man got a touch to it.

Into the last 10 minutes and you couldn’t see Argentina finding a goal here. They were really limited. Terrible from Rodrigo Palacio, who lets the ball run away from him on the wing and out of play. Lionel Messi, who had hardly been in the game just needed one chance. He got the ball just outside of the box, there were six or seven red shirts around him but he curled a beauty into the top corner. The goalkeeper had no chance and for the second game in a row Messi demonstrated the clinical finishing that had made him a fan favourite in Catalonia.