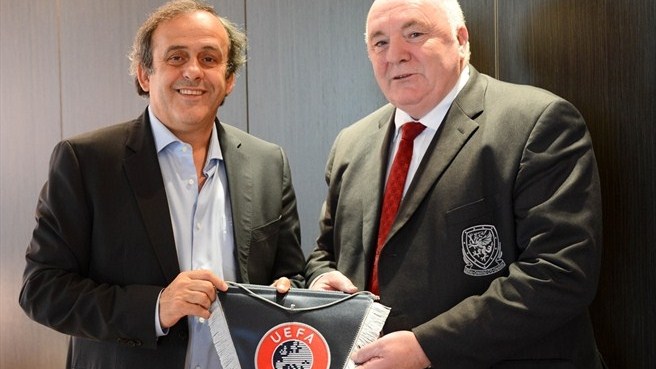 Recently celebrating his 25th year at the Football Association of Wales and the second anniversary of his appointment as FAW President, Trefor Lloyd Hughes spoke to me about how he’s found the role so far.

It has been a long journey from the Anglesey League to the top of the Welsh game – however, having recently returned from Andorra, Mr Hughes was keen to express his happiness in the role.

Mr Hughes argued that recent times had shown how well Wales could compete with other, bigger countries and footballing associations across Europe.

“I think it is a situation where people don’t realise how much Wales is involved in the game across the world.”

“In hosting the European Super Cup this summer we put Wales in the forefront to the UEFA executive members when making the decision as to where to host this year’s Super Cup – they thought the organisation of our bid went really well.”

The former FAW treasurer also thought there was reason to be optimistic about what the future holds for Welsh football with the verdict regarding Cardiff’s bid for hosting Euro 2020 matches coming soon.

“We’ll know this Friday what happens with that and I’m looking forward to that decision. I’ll be disappointed if we don’t get it – we’ve put everything into this.”

“We’ve had good support from the Welsh Assembly government, transport companies – you name it. Everyone has been very supportive but the real jewel in our crown is the Millennium Stadium – that is the big plus point.”

The FAW President conceded though that it hasn’t been an easy role to fill as he went into detail regarding nearly resigning after his first six months of leading the Association.

“The Barry Town situation, to me, was the biggest disaster in Welsh Football in my time because the Welsh FA only lost that case because we hadn’t looked at all of the evidence. It was a stupid decision.”

The Barry Town situation saw Mr Hughes call his councillors down to Mid-Wales to discuss new evidence in the case to lift the standing orders against Barry Town and allow them to continue at Welsh League level but some councillors didn’t even want to discuss it.

“I was seriously thinking of resigning due to that situation, however since then my main motivation has been to work within and change the FA to stop these situations arising again!”

Change was a word that kept popping up as Mr Hughes discussed the difficulties he faced in the role and what needed to be done moving forward.

“Change is essential but it is a long process and mistakes are going to be made – I believe we’re making the right changes but if they don’t work then we have to fall on our swords and go back to the drawing board.”

A change that will surely excite many football fans in the North of Wales was the FAW President’s eagerness to bring international football back to Wrexham.

“I’m trying very hard to get international friendlies played again in the North and was speaking to Chris (Coleman) just a couple of days ago about bringing the squad up to North Wales to do some training sessions.”

“The three European trophies have recently been brought up to North Wales to bring more publicity to Anglesey and the north of Wales – I’m very appreciative of my roots and want to bring publicity to the north and Anglesey if I can.”

On the subject of the men’s national squad, Mr Hughes was bullish about their chances of qualifying for the 2016 European Championships in France.

“I think that we have a good team – I think we can do well. We’ve got a good chance of qualifying but the support is crucial. We had absolutely great support in Andorra – if we can get that for every game then it’ll be a great boost to the team.”

Unsurprisingly, Mr Hughes had nothing but good words to say about Welsh Football’s latest superstar – Gareth Bale as our interview neared its conclusion.

“Gareth Bale for instance, I think he has the talent to be at the top of the world game for the next four to six years – there is no doubt in my mind about that.”

“In the Super Cup I saw him at the trophy presentation and he saw me and came over and grabbed me. We had a quick conversation and he seems to be very happy with the way things are going for him right now.”

With just under a year left in his current role at the FAW, Mr Hughes was keen to close the interview showing his appreciation for the opportunity he had been given.

“I thank everyone who has given me the opportunity to be in such a prestigious position as the President of the FAW but be assured that I have not forgotten my roots – my feet are firmly on the ground!”