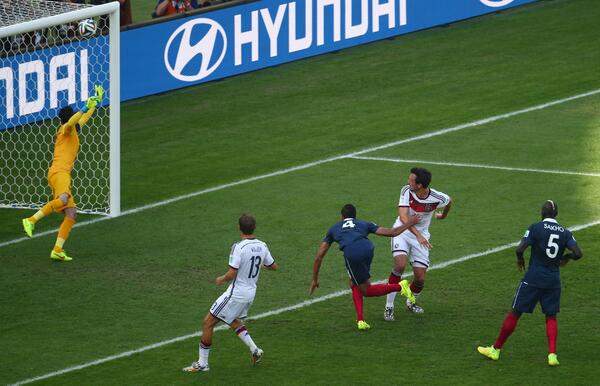 What a difficult few days Wednesday and Thursday were, right? No World Cup games on? What were FIFA thinking?! Never mind though; today the action resumed in style as France took on Germany in the first of two epic Friday night games. Read on to find out our thoughts on the action!

After the last round of fixtures, many fans and critics believed that these two sides needed to make changes coming into this fixture; the coaches must have heard these concerns. Greizmann and Sakho came in for Giroud and Koscielny for the French after Deschamps’ tactics up front in the last game with Giroud didn’t go to plan; Sakho and Varane seem to look like a more comfortable partnership than Varane and Koscielny. The Germans made changes too, perhaps out of necessity, as Lahm dropped back into his former right-back position in place of the injured Mustafi.

It took France six minutes to make any sort of impression on the game as the Germans executed their game plan to perfection early on. Joachim Loew had Germany set up to press very high and playing a high defensive line from the outset, forcing the French to rush their passing game and lose possession frequently. They couldn’t make this good early work pay though, despite throwing constant amounts of crosses into the box, as the French had the more clear-cut chances in the opening ten minutes as Valbuena and Greizmann both looked to get in behind the high line of the Germans to find Benzema in good positions but their efforts came to nothing.

Germany, efficient as ever, only had one really good chance in the opening 15 minutes and they took it to give themselves a 1-0 lead after 12 minutes. After winning a free-kick in a wide position on the left-flank following a little tussle with Paul Pogba, Toni Kroos whipped a dangerous delivery into the box. Mats Hummels connected with the delivery to guide the ball into the far corner past the hapless Hugo Lloris; it wasn’t the most spectacular of finishes but when you consider that Hummels held off Raphael Varane in the process of tucking the ball away, the technique involved was pretty special.

The Germans, still sticking to their game-plan, had a very firm grasp on the game from this point in the half; like in their previous games though they had a few half-chances but couldn’t take any of them to extend their advantage and France, thanks to Valbuena were still looking pretty dangerous when they had a spell of possession, having quickened the tempo a bit. He was at the forefront of all of France’s good offensive work whenever it came about; case in point would be after the 30 minute mark where he controlled an awkward ball from the right with his chest before volleying at Neuer – Benzema came in for the follow-up but couldn’t tuck away. France were slowly but surely growing in to the game as halftime approached. Creating the half-chances was definitely boosting morale in the French camp but Germany will have taken comfort in the fact that Neuer was his usual colossal self between the sticks; his usual prowess in distributing the ball was a big help to Germany as they looked to keep France from seizing too much control of the game.

France came out for the second half with a clear idea of what they wanted to do: pick the tempo up a few more notches. The French midfield trio of Matuidi, Cabaye and Pogba pushed much higher up the pitch in the opening exchanges of the second period to join in on the action that Greizmann and Valbuena were trying to create for Benzema in front of goal. Again though, they couldn’t find the final ball that would allow them to really test the Germans, and when they could, Manuel Neuer was more than capable of dealing with any danger; the pace of the game then slowed again as the 70 minute mark approached.

With the game now becoming no more than a scrappy affair in midfield or comfortable passing between defenders, Deschamps had to act quickly to try and give his side the initiative again; he attempted to do this by bringing on Loic Remy for Yohan Cabaye, switching to a 4-2-2-2. This switch initially had the desired effect as the French soon had a few very good half-chances. Both moves saw Greizmann involved, who caused the Germans real problems throughout – the first one fell to Benzema in the box, who stole a diagonal ball that seemed to be heading for Valbuena, only to cut back onto his right foot and have his shot blocked by the excellent Mats Hummels. The second saw Matuidi try a difficult shot from a very tight angle that Neuer could only palm away. This period of French dominance culminated in them nearly surrendering another goal to the Germans as Neuer collected a French corner before sending Muller, Schurrle and Ozil away on a counter-attack. Ozil darted free of the French defence after Evra had stopped chasing momentarily after calling for offside but in the time it took Ozil to move more centrally from his wide position the defence had recovered somewhat. The Arsenal man was still able to pick out Muller who miskicked, before the ball fell to Schurrle but had his shot expertly saved by Hugo Lloris.

This was to be the last of the meaningful phases of play in the game as the Germans did what they are known for doing and grinded out the last few minutes of the game to seal the 1-0 victory and passage to the World Cup semi-finals. Not quite the excellent game we expected; the Germans were quite content to take what France were giving them offensively whereas the French got going far too infrequently, didn’t have many ideas when they did get going and lacked a bit of magic.

Mats Hummels was absolutely excellent for the Germans; the whole of the German backline was. Kroos and Ozil were pretty anonymous. The French on the other hand; Lloris was excellent when called upon –  Greizmann, Pogba, Valbuena and Matuidi were very busy, trying their best but the rest of them were far too inconsistent in their efforts.

Germany are through then but, offensively at least, they have a bit of work to do if they’re to go further! Stick with us at Fortitude to see how it all pans out in the semi-finals!