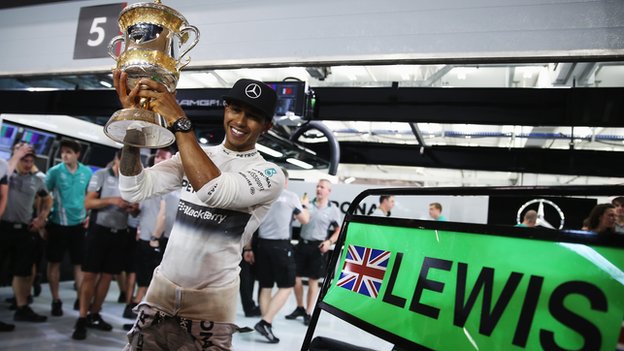 Lewis Hamilton collected his second successive win of the season in an event filled Bahrain Grand Prix securing another dominant weekend for Mercedes. Team-mate Nico Rosberg finished just over a second behind Hamilton and 24 seconds ahead of the rest of the field as the two Mercedes drivers were in a league of their own.

The pair battled for top spot throughout the race as Hamilton opened up a 10 second gap between him and Rosberg until a safety car period wiped out the lead and it became a 10 lap battle between the two drivers, Rosberg’s fresher tyres against Hamilton’s aggressive defending.

Sergio Perez brought home his Force India in third, giving the team their first ever podium finish and Perez’s first podium since the 2012 Canadian GP. The Mexican just managed to hold off Daniel Ricciardo who finished half a second behind and almost nicked the final spot on the podium in the last few corners.

Perez’s Force India team-mate, Nico Hulkenberg crawled in for a fifth place finish as he struggled with an energy harvesting problem in his Mercedes power-unit in the last few laps. This lead to him holding up an entire train of cars including Sebastian Vettel and the two battling Williams drivers Massa and Bottas, fresh off their team order spat in which Massa refused to move over for a faster Bottas.

Fernando Alonso and Kimi Raikkonen took the final two points positions to round off a weekend in which Chief Designer of Ferrari said that their 2014 needed a bit more of everything in order for them to compete with the front runners. There was also no luck for McLaren as both Jenson Button and Kevin Magnussen retired before the end of the race.

The race said a lot towards who was the dominant driver at a lot of teams as throughout the race, we saw a lot of battling between team-mates for race position. Hamilton and Rosberg dueled throughout the latter stages of the race, not only to establish who was number one in the team, but who would win the race. The Force India duo had their battle for the last podium place for several laps before Hulkenberg’s power unit hit a problem and caused him to drop off and surrender his position to Ricciardo, who was also battling fellow team-mate Sebastian Vettel for race position before team orders came in to tell Vettel to move over as Ricciardo was faster than him. A command that Sebastian Vettel probably thought he would never hear coming from his pit wall. These were followed by the two Williams cars being driven by Massa and Bottas, the former having a point to prove.

Although with all this inter-team battling going on in the top 10, it was almost easy to forget why the race was so close in the end, and that was from an incident on lap 44 involving Pastor Maldonado and Gutierrez. On the first corner of the lap, Maldonado plowed his Lotus into the side of Gutierrez’s Sauber causing the car to perform a barrel roll and forcing a safety car period. The Lotus driver received a triple punishment for the incident as the stewards hit him with a 10 second stop go penalty, a grid penalty for the next race and penalty points. Maldonado will now have to be careful not to pick up any more points as to avoid being suspended for races in the future. 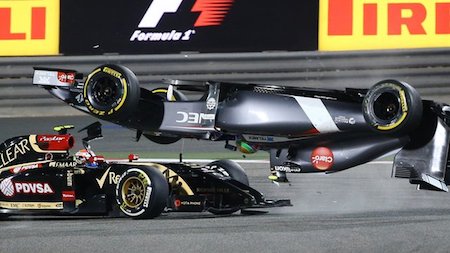