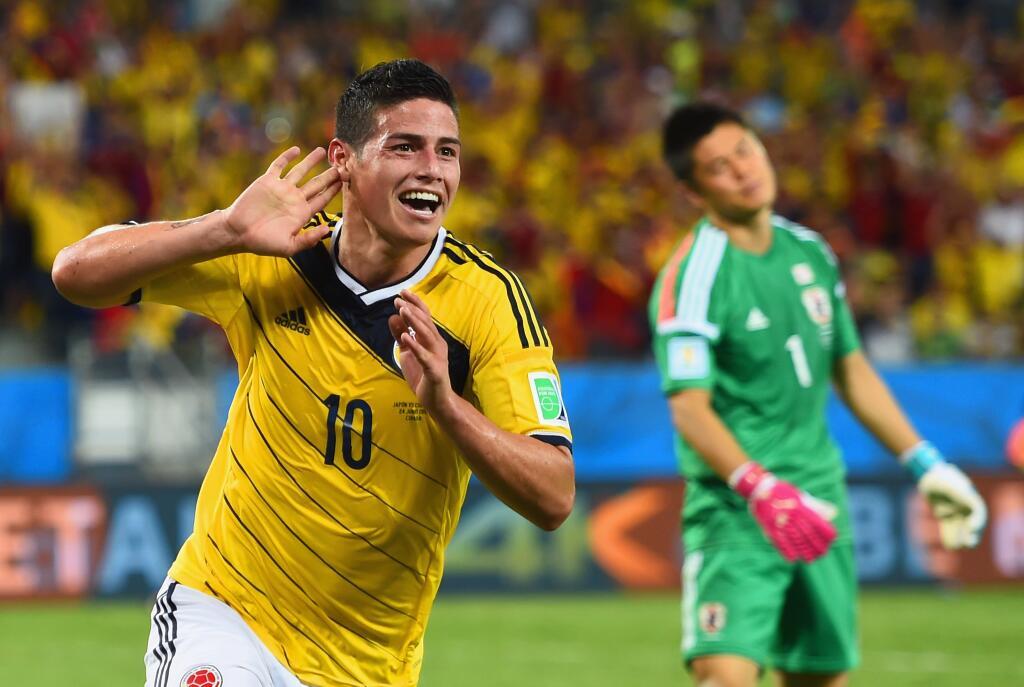 With all the talk about Luis Suarez’s moment of madness sweeping around the internet like wildfire and FIFA coming out and saying that they will investigate the incident after the game, it was difficult to remember that we still had to see who the Liverpool striker could be playing in the next round.

With a lot still to play for in Group C we turned our attention to the night’s second round of games that saw Japan take on Colombia in a do or die game for the Asian side. Colombia maintained their tag of dark horses by winning their first two games of the group and securing early qualification, meaning that in a worst case scenario they will be looking at a second round match against surprise Group D winners; Costa Rica. Japan however had it all to do as their fate was out of their hands. A win against the South American side would not have guaranteed them qualification from the group as they also had to rely on Greece doing them a favour against the Ivory Coast.

Chances were few and far between in the opening stages of the match although it was Japan who were unlucky to not take the lead after nine minutes as Hasabe did well to hold onto the ball in the box, holding off the Colombia defender before he laid the ball off to Hokobu; who obviously didn’t read the script as he fluffed the chance to give his country a much needed goal.

Within minutes of that chance Colombia went ahead as Cuadrado slotted away his penalty after Yasuyuki Konna took down Adrian Ramos in the box giving the ref no other choice but to award the South American side the penalty. Cuadrado sent Kawashima the other way with his penalty which looked to all but seal Japan’s fate and hand Ivory Coast second place in the group and setting them up a tie against Uruguay. The goal was Colombia’s first goal on target.

Japan came back at Colombia after the goal, exploiting a gap in the right side of the Colombian defence. Although try as they might they never really tested Ospina in goal with any of their attempts, the closest they came to an equalizer came from a Hokobu shot which forced a save from the keeper and led to a corner which in the end came to nothing. Keisuke Honda came close on the 32nd minute as his free kick sailed across the goal as he attempted to trick Ospina in goal. However, the Colombian keeper had none of it and had the free kick more than covered as Japan carried on their desperate search for an equalizer.

When it started to look bleak Okazaki gave Japan a lifeline in the dying embers of the first half.  Keisuke Honda sent in a dangerous ball to the middle of the area and Shinji Okazaki flung his head at it to power beyond David Ospina. The goal still meant Japan were going out but it gave them the platform they needed to go on into the second half with a real chance of snatching the second goal they needed in order to progress to the next round.

They were further boosted as they received the news that Greece had taken the lead in their game against the Ivory Coast. Samaras finally broke his World Cup duct and gave the Greeks a surprise lead which meant as it stood they were going through with only scoring a solitary goal.

Although they fell behind again as Colombia took advantage of some criminal defending. James Rodriguez found Porto man Jackson Martinez in acres of space in the box. The Porto striker made no mistake in front of goal, continuing his fine form in Portugal which has linked him with moves all over the continent by his agent, including to Liverpool and Arsenal. This now meant Japan needed two goals to have any chance of progressing to the last 16. Kagawa came close just minutes after the goal although his long-range shot went high and wide over the goal, not even challenging Ospina in goal.

With Japan in desperate need of a goal, the game opened up a lot and become a more free flowing game as Japan’s need for a goal gave Colombia an opening to snatch a 3rd goal to well and truly put the game and Japan’s World Cup campaign to bed.

Hokobo continued his horrible luck in front of goal as he sent another shot wide of goal after some great link up play between Honda and Uchida lead to a great cross in front of the goal. With the Striker’s last goal coming in a World Cup warm up match against Mozambique, he was showing no signs that he was about to be the man to save Japan.

Colombia soon put the game to bed as Jackson Martinez put the game away with his second goal of the game. James Rodriguez was again the architect of the goal, wiping out the Japan defence with a smart ball for Martinez to run on to and he fired home from inside the box.

In the other game, Wilfried Bony pulled Ivory Coast level against Greece meaning that even if on the small miracle that Japan were to score 3 goals, they would be going home along with Greece.

During the latter stages of the game, Colombia brought on replacement goalkeeper Mondragon to make him the oldest player to play a World Cup game. The previous record was held by Cameroonian Striker Roger Milla who has held the record since his appearance in the 1994 finals where he played against Russia.

In the dying embers of the game Monaco man James Rodirguez put the game further beyond doubt as he went from provider to scorer as he got Colombia’s fourth of the night. He scampered away down the left, turned Southampton man Maya Yoshida inside out and fired home.

The night’s drama was not over as Samaras was fouled inside the area during stoppage time in the other game. The Celtic striker, who had already scored earlier on in the game smashed home the penalty which meant that the EURO 2004 Champions had snuck through into the round of 16 against all odds and continuing the unpredictability of this year’s world cup.

With these results it means that it will be Colombia against Uruguay and Greece versus Costa Rica in the second round.