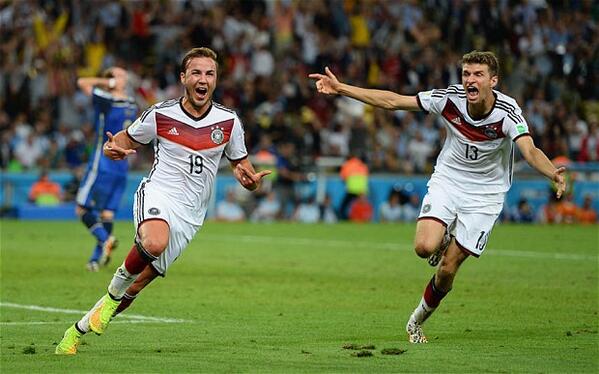 Well the day has arrived already – the 2014 World Cup final is here! Seven of the eleven players selected for our Fortitude Team of the Tournament (which you can see here) were on the pitch tonight! Would the ruthless efficiency of the Germans power them to a fourth World Cup victory in their record eighth final, or would Lionel Messi – at the same age that the legendary Maradona won his first World Cup for Argentina – be able to lead the South Americans to victory in the Maracana? Read on to find out!

Before things even got underway in Rio, things began to go against the script for the Germans as Sami Khedira, who found his top form in the semi-final, pulled out injured with just minutes to go before the kick-off and was replaced by Christoph Kramer – his first start for Germany, a hell of an occasion to earn that honour! Germany had a chance early on to execute one of their infamous free-kick routines but nothing came of it except an Argentina counter-attack. Both sides’ strategies in the opening exchanges were fairly obvious: the Germans reverted to type, playing their usual possession game whereas Argentina looked to hit on the break.

The fans were getting the ‘Ole’ chants going early on; it took just six minutes for the fans to pull that one out of the locker, a testament to the Germans’ dominance on the ball. Argentina were having the better of the offensive play though as Lionel Messi and Ezequiel Lavezzi causing problems down the German left-hand side; they didn’t quite produce anything worthy of challenging Neuer in the opening 10 minutes but they at least made him catch a few efforts.

Kramer coped well early-on in his debut as he completed all seven of his passes in the opening 15 minutes; he was playing a bit higher up than the Argentinians might have expected Khedira to have been playing and was causing a few more problems as a result. The only blight on his performance in the opening exchanges was when he took a shoulder to the face from Garay in the corner but otherwise the young midfielder started very well.

Argentina then had an excellent opportunity to go ahead as Toni Kroos, who had been one of Germany’s best players in the tournament, headed an Argentinian goal-kick back towards his own goal, only for Gonzalo Higuain to intercept the header and find himself clean through on goal. Unfortunately though he seemed to wilt a bit under the pressure as he snatched at the half-volley and dragged his shot wide.

Higuain had another chance soon afterwards though as Argentina worked their counter-attacking plan to perfection as Lavezzi curled a really inviting ball into the German box for Higuain to finish venomously; the Napoli man sprinted away in celebration before realising the flag had been raised for offside. Nevertheless, Argentina were in the ascendency at this point. Germany had to substitute Kramer for Schurrle also; add this to the fact that Argentina weren’t giving them much of a chance to find a pass and the Germans were struggling to find their rhythm.

Messi then took his turn to antagonise the German defence; he’d been kept quiet for the most part but on this occasion the little Barcelona man danced his way into freedom after leaving the left side of Germany’s defence for dead again before arriving inside the six yard box and having his effort smothered by Manuel Neuer. Höwedes then went and had Germany’s best chance of the match as he crashed a Toni Kroos corner against the post. It was a very entertaining first half with Germany having 70% of the possession but Argentina having the better of the chances; both sides were leaking opportunities after some poor work down their respective left flanks but neither side had been able to capitalise by halftime.

Sergio Aguero entered the fray for the Argentinians as a substitute at the start of the second half as the South Americans went on the hunt for that elusive first goal. They started the half very positively too as Higuain, Aguero and Messi in particular all went very close for Alejandro Sabella’s side. Messi in particular broke clean of the German defence but rolled his effort wide of the German far post; a moderately difficult chance but one we’ve been used to seeing the little magician put away over the years. With half an hour to go of regular time, Germany had yet to have any kind of impact on the second half; they were still dominating possession and had had more than twice as many passes as their South American counterparts up to this stage but in front of goal they hadn’t been quite as dangerous.

Schweinsteiger, Müller and Lahm were the only players forcing the issue for Germany offensively; Schweinsteiger was also having a great game defensively too, stopping Argentina from gathering the momentum they had at the beginning of the second half. The game had very much become a battle in midfield as Mascherano and Schweinsteiger were crucial for both sides, breaking down the opposition play and stopping most offensive play; it was great to watch the two of them go to work but it took a lot of the spark out of the game. The game was crying out for a goal as we passed the 75 minute mark but it didn’t look like coming any time soon.

Both sides were still doing their best to get ahead but it was always either coming down to the two midfield anchors to break down the play and stop the moves or just a general slip or lacklustre final ball. Mario Gotze came on with five minutes to go for the Germans, in place of Klose who surely had just played his last World Cup match. In truth it was probably a change that should have come much sooner as the Germans had looked pretty pedestrian since the 70 minute mark.

Extra-time beckoned. The game so far belonged to the likes of Schweinsteiger and Mascherano. Hummels and Boateng had been excellent as well, the latter in particular had done an excellent job of keeping Messi quiet for the majority of the game; much like he had done with Cristiano Ronaldo earlier in the tournament. Germany stared the first half of extra time brighter as they had a great chance through Schurrle in the opening minute as he lashed a shot at an awkward height towards Romero but he parried away. Argentina then set out to hit on the break again and had it not been for Boateng nabbing a few last ditch tackles on Messi, the Argentinians might have been on their way to the lead.

Palacio then sent another excellent chance begging for the Argentinians as Rojo found him with an excellent early cross from the left flank. Palacio steadied himself then for the shot but Neuer came out very quickly and forced the striker to act quickly; Palacio then panicked and sent his lobbed effort wide. Extra time followed the same trend as the previous periods; Germany were pressing fairly high and keeping possession whereas Argentina were happy to play scrappy and hit on the counter-attack.

The second half of extra time saw Argentina go back to their roots and engage in some very physical defensive play; Schweinsteiger was the first victim after being scratched in the face by Aguero before Palacio had a few niggles at Lahm, pulling him back once by the shirt and pushing him off the ball on another occasion. The German bench was incensed with this and were all taking their turn to shout abuse at the referee and let off some steam. Soon though, Germany had something to smile about as two substitutes combined to give Germany the lead with seven minutes to go. Schurrle waltzed his way down the left wing before crossing the ball in to the completely unmarked Mario Gotze who took a stunning touch with his chest before sliding to volley the ball past Sergio Romero and inside the Argentinian far post for the 1-0 lead.

Argentina were made to pay for their missed chances earlier in the game as they tried their best to grab an equaliser but couldn’t quite get one as Germany saw out the match and grabbed their fourth World Cup trophy. The best international team in the world had trumped, arguably, the world’s best player. Schweinsteiger, Boateng and Hummels had been excellent tonight for the Germans; Mascherano was exceptional for the Argentinians too! It was probably the fair result; it took until the dying minutes of the tournament for the Argentinians to go behind for the first time in their entire seven games; a testament to their play throughout this tournament. It’s been a pleasure to cover this tournament so extensively! I hope you’ve enjoyed it as much as we have; stick with us over the next few weeks as we gear up for the return of the Barclays Premie