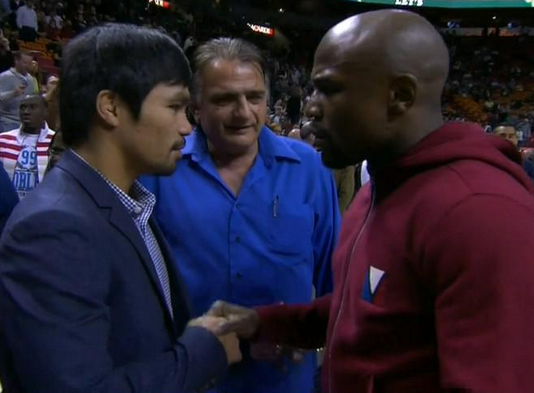 Boxing used to be about who was the best in the division. Ali v Frasier, ‘Sugar’ Ray Leonard v Tommy Hearns and more recently Lennox Lewis v Mike Tyson were all mega fights to determine the true undisputed champion of their respective divisions. Though nowadays, it seems that money is the new king.

For years, fight fans have been praying for one fight in particular. Floyd Mayweather Jr v Manny Pacquiao. The two best pound for pound fighters of a generation, possibly of all time. Accusations of refusing random blood tests and demanding too big a purse have seen negotiations between the two screech to a halt on numerous occasions. However, we seem to be closer to the most anticipated fight for decades than we have ever been before after witnessing the two exchanging phone numbers last week at a Miami Heat game.

In light of this dream fight finally gaining some momentum, here are five fights that the team at Fortitude Sport have added to their boxing wish list for 2015.

This fight has already been made and is due to take place on February 21st. And rightly so. The first bout between the pair last September was one of the most entertaining and evenly matched fights of 2014 (which, for the record, I had Smith winning by two rounds) . However, the judges in Germany bafflingly saw it as an Abraham walkover, one judge giving the Liverpool man just one round. The other two judges had the German up by six rounds at the final bell. Although the fight will again take place on German soil, Scousers will be over the moon with Smith’s chance at a rematch for the WBO title.

These two fought a great fight early in their professional careers with Groves edging it with a majority decision. Groves went on to famously challenge IBF king Carl Froch, almost pulling off an upset in the first fight and falling short in the second record-breaking bout at Wembley Stadium.

Since then, DeGale has been able to continue his progress quietly and has positioned himself as the mandatory challenger for Carl Froch’s IBF title. Although, a fight between the two looks unlikely due to Froch chasing one last showdown in Las Vegas. Should this happen, Froch will vacate the title and DeGale will likely fight Andre Dirrell for the belt.

Meanwhile, Groves should fight Andre’s brother Anthony Dirrell for the WBC belt. Should the two come through each of their respective title fights, we could see yet another Super-Middleweight super fight with two world championships on the line.

The UK’s super bantamweight division has improved dramatically since the uprising of Bury fighter Scott Quigg and Belfast superstar Carl Frampton. Quigg won the WBA regular title back in 2012 after knocking out Rendall Munroe and ever since, Frampton has been interested in the bout. The Belfast man has made strides in the past couple of years, earning his first world title against Kiko Martinez in September, adding more incentive for the two to meet.

Frampton’s next fight against Chris Avalos, co-promoted by Quigg’s promoter Eddie Hearn, will air on ITV, which is certain to lift the Irishman’s profile. There’s a good chance this one will happen at the back end of 2015!

Granted, this is a fight that would take place at the back end of 2015 with Joshua’s recent setback in the form of a back injury, it is simply a fight that has to happen. Nothing excites the casual boxing fan more than a heavyweight clash, especially one with a classic hero/villain story.

Fury has often been the focal point of controversy, the last incident occurring when he was fined £15000 for misconduct during a press conference in which he swore at a journalist. Anthony Joshua meanwhile, has proven to be very respectful to the media and his opponents thus far whilst rising up the heavyweight ranks since his golden success at London’s 2012 Olympics.

Fans have been crying out for a step up in opposition for the gold medalist and should he make a statement in the fight against ‘Kingpin’ Kevin Johnson, which is due for April, Joshua will be on track for a crack at Tyson Fury.

Although these two have plenty of options for fights in 2015, this is the one we want to see. Brook has been calling Khan out for what seems like forever with the Bolton man dismissing his Yorkshire counterpart as a level below him. However, Brook came through the ranks and proved his worth back in August when he went to Shawn Porter’s backyard of California and ripped the IBF title away from the American in style.

Khan has made it clear that he would prefer a fight with Floyd Mayweather Jr, with Manny Pacquiao being his second choice should the two yet again fail to come to terms on a mega showdown. But surely his third choice is indisputable and must be Kell Brook. For the money, for the fans and for the glory.