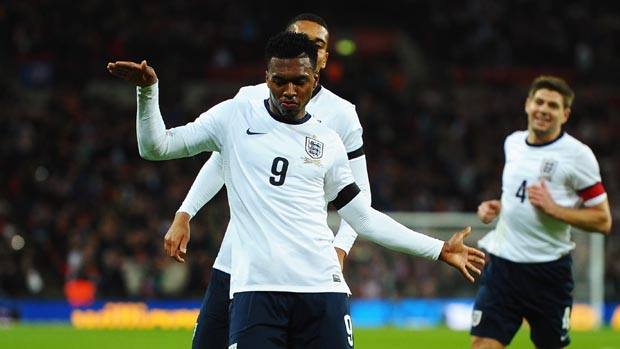 Much of the talk in recent weeks regarding the English national side has naturally been about the upcoming World Cup tournament in Brazil. Even more recently, there’s been talk of England’s planned use of psychologists to help them get their heads around the dreaded penalty shoot-outs that have plagued them in recent years.

Tonight though, no penalty shoot-outs, no tournament pressure, the talking stopped and England were asked to perform.

The line-up certainly delivered a lot of promise for England fans. With five Liverpool players comprising the spine of the team, the cohesion that the Three Lions have lacked in recent months (or years) will have been less troubling to fans as Gerrard and Henderson anchored the midfield, Sturridge led the line as Johnson and Sterling were charged with occupying the right hand side – surrounded by a host of England regulars, things were looking bright.

Denmark though, a side full of names familiar to English football fans, gave Hodgson’s men a stern test. Aside from an opening for Raheem Sterling to get into the box and put in a dangerous ball (he failed to do the latter) and two half chances for Wayne Rooney, Denmark held their ground well against what was a disciplined England side. Both sides pressed very well however England were initially much more keen to get forward when in possession although they lacked ideas once in the final third.

However, England kept their shape well playing a 4-2-3-1 formation with the midfielders and forwards switching positions seamlessly throughout, making it difficult for the opposition at times; a weapon that, if honed, could really turn them into a dangerous proposition come June. The back four, however, didn’t look as comfortable as the rest of the side as on the odd occasion that they had to deal with anything, they looked to make a meal of it.

England had their first significant attack of the game mere minutes before half-time as Rooney and Sturridge combined to release the onrushing Ashley Cole down the left-hand side who put in a very inviting ball for Sterling to tuck away only for a bit of last minute Danish defending to stifle the Liverpool man’s efforts. Sturridge went close again from a corner only for Kasper Schmeichel to emulate his father and throw himself into making a great save.

Luke Shaw entered the fray to make his England debut after half-time but England seemed completely out of ideas by then. Adam Lallana and Danny Welbeck entered the game soon after in place of Jack Wilshire, who was on the receiving end of a stern challenge from Daniel Agger in the first half, and Wayne Rooney who really struggled to get into his stride in this fixture at all.

Coming into the final 20 minutes of the fixture, such had been the level of football on show up to that point, the fans had resorted to entertaining themselves by doing the Mexican wave. England were still pressing for the opener but were struggling to make any inroads whatsoever into grabbing that elusive goal. They did finally manage to do just that though as second-half substitute Adam Lallana, definitely one of England’s better players on the night, made a clever move on the edge of the box to float the perfect ball in for Daniel Sturridge to head home and make it 1-0. One of the few positives, along with Raheem Sterling’s performance and the aforementioned retention of shape and switching of positions, that Roy Hodgson will be able to take from the game will be the impact that Adam Lallana had from the bench to help get the goal.

A first win in three for England will surely be a welcome one, however the manner of said win will be of concern to the upper echelons of those involved with the national side. England held their shape very well throughout, pressed well and got the result which, at the end of the day, is what it’s all about. However, looking as toothless as frequently as England did against a side that hasn’t even qualified for Brazil and was also without it’s best player (Christian Eriksen), it is very obvious that Roy Hodgson will have a lot of hard work on his hands between now and June. Giving Adam Lallana a starting chance will be the change on everyone’s mind right now as he was exceptionally good off the bench; no one could get near him, but it’ll take more than a few changes for England to be anywhere near the level they should be by the time they reach Brazil.