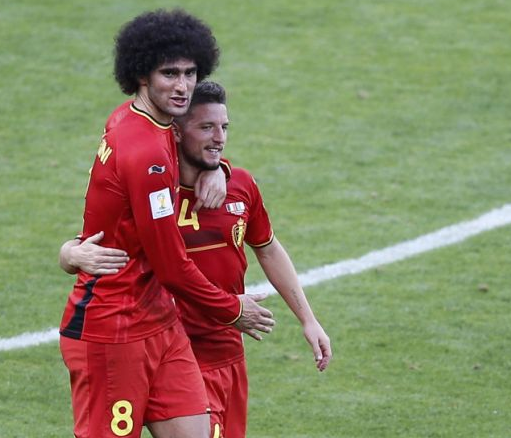 Two goals in the last twenty minutes from substitutes Dries Mertens and Marouane Fellaini gave Belgium a vital win in their first game in the group stages against an unlucky Algeria.

Algeria took a surprise lead after Valencia striker Sofiane Feghouli scored from the penalty spot. Feghouli was the man who was fouled after Jan Vertonghen clumsily brought the 24 year old down in the box; otherwise both keepers were rarely tested in the first half.

Belgium coach Marc Wilmots decided to try and spruce things up by bringing on Napoli midfielder Dries Mertens for Tottenham’s Nacer Chadli and just fifteen minutes into the second half took off key striker Romelu Lukaku. Wilmots substitutions worked a treat as the Belgians seemed to wake up after a pretty poor first half. In the first half, they just didn’t look like they were jelling whatsoever and the coach made some bold decisions that paid off.

The European team equalised with twenty minutes to go as the £27.5 million Manchester United midfielder Marouane Fellaini met a Kevin De Bruyne cross with his head to put Belgium back in the game.

Belgium made a fantastic comeback as they went on a counter attack as Eden Hazard set substitute Dries Mertens free and the Napoli man drove the ball past Rais M’Bolhi to put his side into the lead.

They nearly equalised five minutes before Fellaini did because after 65 minutes, substitute Divock Origi broke free from the defence but saw his low effort bounce off the pitch and get blocked by the leg of Rais M’Bolhi.

This is Belgium’s first World Cup since the 2002 World Cup and this squad is seen as their golden generation. The majority of their squad have or still do play in the English Premier League and they have one of the youngest average aged squads in the tournament. They also have on paper one of the strongest squads in the tournament, up their with the Spanish and the Germans. They possess a squad with an array of domestic league and cup medals, and the occasional continent tournament club medal as well. Their most experienced player in the squad is also their oldest as Daniel Van Buyten is the only player over the age over 30. The biggest exclusion in the Belgian squad is Christian Benteke of Aston Villa. Benteke ruptured an achilles tendon in club training and therefore missed the rest of his clubs season and his nation’s World Cup campaign.

The 2002 World Cup saw Belgium get through the Group H of the group stages (the same group they are in this year) and they picked up a victory against Russia (one of their opponents in this years group stage). But they went out in the second round as goals from Rivaldo and Ronaldo handed Belgium a 2-0 loss against eventual winners Brazil.

Many of the Algerian squad have also been a fixture in British football. For instance, the Algerian captain Madjid Bougherra played for Rangers in Scotland, Hassan Yebda played for Portsmouth on loan, Carl Medjani was on the books at Liverpool in the early 2000’s and 19 year old Nabil Bentaleb made his first team debut for Tottenham Hotspur the season just passed.

This is only Algeria’s fourth time qualifying for the World Cup and they haven’t won a World Cup game since the two they won at the 1982 World Cup in Spain. Algeria last time out at the 2010 World Cup in South Africa, finished bottom of their group, losing to Slovenia and the United States by single goals and getting a very respectable draw against a poor England side. Algeria’s most famous moment in world football was the 1982 World Cup when they defeated West Germany. What happened in their group was one of the most controversial moments in World Cup history as West Germany and Austria seemed to just play out for a draw, meaning that they qualified from the group stage and Algeria were eliminated.

Algeria will be disappointed with the outcome as they deserved at least a point out of this game due to their defensive stubbornness and hard work, but Marc Wilmots made three fantastic decisions as his substitutes all performed and two of them got the winning goals.