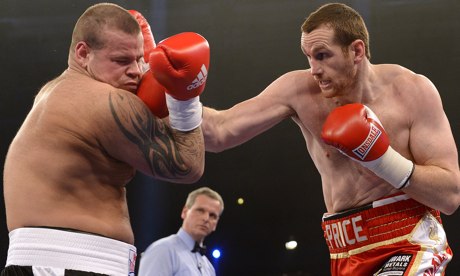 David Price returned to the ring for the first time since his second devastating knockout loss to the now 42 year old American, Tony Thompson.

The Liverpudlian had a disastrous year in 2013 after losing twice by knockout to former world title challenger Tony Thompson. His promotional ties with Frank Maloney were severed as well as his working relationship with trainer Franny Smith.

12 months ago, Price was a largely feared, undefeated fighter being tipped as the ‘heir to the Klitschko throne’.  He is now left picking up the pieces of his career after a year that must still seem like a nightmare. The heavyweight will look to rebuild in 2014 with his new promotional team Sauerland and new trainer Tommy Brooks, best known for being the trainer of the most dangerous heavyweight of all time, Mike Tyson.

Price returned to the ring on January 25th in Stuttgart with a first round knockout of Istvan Ruzsinszky, a late replacement for tough Kazakh, Konstantin Airich. Price was quick to concede in a post-fight interview he was disappointed with the level of his opponent but that he was looking forward to the coming year.