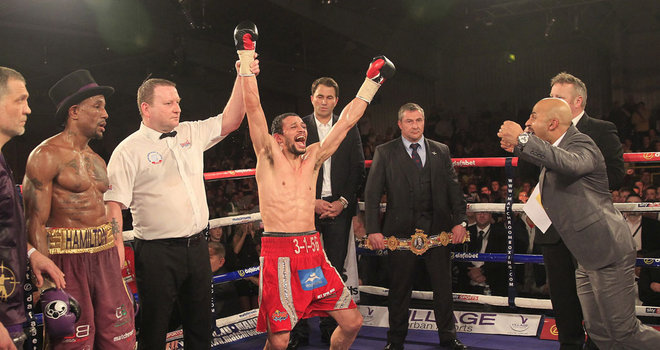 Former Sheffield United footballer, Curtis Woodhouse achieved his dream of becoming British Champion as he scored a tight split decision victory over Darren Hamilton for the Lonsdale Belt on one of the most exciting cards in this writer’s memory.

Woodhouse gave an understandably emotional interview with Sky Sports after the light-welterweight bout, dedicating his last fight as a professional to his late father, Bernard.

“I promised him I’d win it and every promise my Dad ever made me, he kept. I wanted to make sure that I kept my promise too and I did it tonight”, a tearful Woodhouse said.

“How can I ever top what happened tonight? This will never get better for me. I want to bow out as champion and I intend to stick to it”, he said.

Before the fight, Darren Hamilton had been made a heavy favourite after a great run of six straight fights unbeaten, including a glittering performance against fellow Brit and member of Floyd Mayweather’s The Money Team, Ashley Theophane. Meanwhile, Woodhouse had only won his last two fights on points against very tame opponents after his fourth round knockout at the hands of lightweight Scouser, Derry Mathews.

It was a very close contest throughout the 12 rounds, Darren Hamilton proving to be the busier fighter but was not landing as cleanly or as powerful as the Sheffield man. There were a number of rounds that could have gone to either fighter and that was shown on the scorecards as the three judges scored it 116-113 to Hamilton and 116-114 and 116-115 to Woodhouse.

There have been rumours flying around since day one of Woodhouse’s boxing career stating he put a bet on himself becoming British champion before he’d even thrown a punch. However, the former footballer refused to clarify those rumours but was happy to play along.

“I can neither confirm nor deny the rumour but there is a rumour going around that I had a £5000 bet on myself to win the British title at 50/1 so the drinks are on me, baby!”

The main event saw one of the most dramatic fights I have personally ever seen in the sport as hometown hero Tommy Coyle took on Argentine Daniel Brizuela for the IBF International lightweight title in Hull’s Ice Arena.

With three point deductions and eight knockdowns in total, it was a fitting main event but it looked like Coyle was in big trouble when the Argentine came out strong and landed a solid right hand to the head, knocking Coyle down in the second round. But Coyle was straight to his feet and got himself back into the fight winning a couple of rounds as he managed to find his range with clever combinations.

The home fighter’s flurry came to a halt in the sixth however, as he was hurt by some fierce body shots and was on the canvas twice in the round, the second of which, looked like the end for Coyle. Again, Coyle showed magnificent heart and climbed off the floor for the third time and managed to get back to his cornerman Jamie Moore who managed to lift his man for the seventh round.

The crowd was fully behind Tommy Coyle in the eighth but they were soon silenced as he was deducted a point for a low blow. Things were now looking bleak for the Hull resident. However, he soon had the fans on their feet as he knocked Brizuela down for the first time after shaking the Argentine to his boots with a thunderous right hand.

The 11th round was possibly the most exciting, dramatic, ludicrous (there simply aren’t any superlatives that can do it justice) round I have seen in my entire life. Another body shot sent Coyle to his knees but he got straight up and with his first punch put Brizuela on the floor sending the crowd absolutely insane. Brizuela was on the floor again not long after and it looked like the end for him, but an eager Coyle gave him time to recover as he was deducted another point for hitting on the break.

Coyle managed to finish it before the final bell in the 12th round as Brizuela went down for the fourth time with referee Steve Gray deeming the Argentine, quite harshly, not fit to continue.

This ridiculous fight is already my heavy favourite for fight of the year.