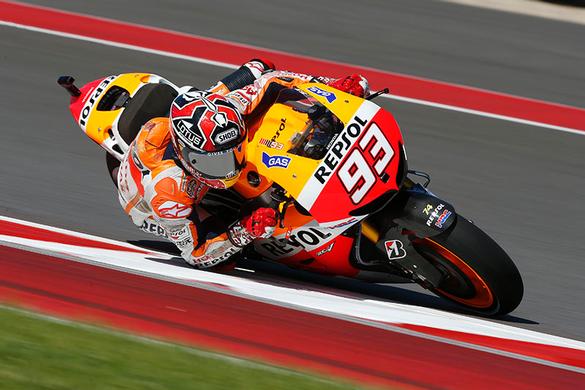 Marc Marquez made it two wins from two races at the Red Bull Grand Prix of the Americas in Austin, Texas. The 21 year old dominated the race from the start of the second lap ahead fellow Spaniard Dani Pedrosa.

Former two time World Champion Jorge Lorenzo finished the first lap in first position but this was because he jumped the gun and started before the lights went out. He eventually worked his way through the field and finished in the points in 10th position. This season hasn’t been what Lorenzo would have expected as already after two weeks, he only has six points to his name after a shock crash in Qatar and his 10th position in Texas.

His partner Valentino Rossi didn’t have a great start but went to fourth after passing Andrea Dovizioso, Stefan Bradl and Coventry-born Cal Crutchlow. But he couldn’t quite get close to Andrea Iannone and eventually tailed off into eighth, after being overtaken by Bradl, Dovizioso, Brit Bradley Smith and Pol Espargaro.

It wasn’t a good day for Cal Crutchlow who had troubles with his Ducati and was seen punching the tank as a number of riders went past him. His day turned even worse when he went down off of turn two and it looked a bad one. The Ducati could be out injured with a broken hand as he was taken away from the track on a stretcher by the medics.

It was a good day for one of the British riders on the field as Bradley Smith stayed strong and performed hard to finish in fifth. He did make it into fourth position after overtaking Stefan Bradl but the man on the number six bike Bradl took his position back to finish in fourth. Bradl himself embarked in a battle with the man who eventually finished third, Ducati rider Andrea Doivizioso. These three men overtook Andrea Iannone, who ended up finishing in seventh place, and as Bradl and Smith battled with one another, the Italian Dovizioso got the opportunity to get some space and it took his chance fantastically. It was the Italian’s first podium finish since the 2012 season as he and his Ducati struggled throughout 2013.

One of the home favourites Colin Edwards announced his retirement at the end of the season after nearly two decades in World Superbike and MotoGP. But the 40 year old Texan couldn’t get any points in his last race in his homeland as he failed to finish the race.

Marquez will hoping to continue his momentum in Argentina for the third round of the MotoGP series in two weeks time.