Costa Rica Hold Their Nerve To Continue The Fairytale 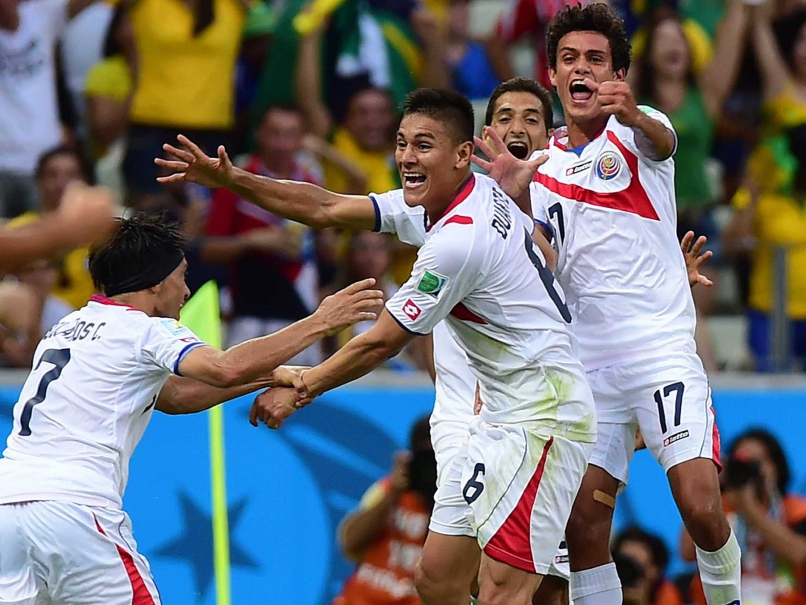 After today’s first quarter-final which saw an exciting encounter between Mexico and Holland, we moved our gaze onto the underdog story of this World Cup as Costa Rica took on Greece to determine who will meet The Netherlands in the Quarter finals.

Both sides going into this tournament were not expected to make it out of their respective groups as Costa Rica were joined by 3 former World Champions in their group: England, Italy and Uruguay. The Central American side beat both Italy and Uruguay on their way to shocking the world and topping their group. Greece told a different tale as they left it right until the last minutes of the group stages to get the goal they needed to sneak through a group containing Colombia, Ivory Coast and Japan to set up this tie.

The first half hour of the game didn’t produce much in regards to goal opportunities, with both keepers not even tested by the oppositions strikers as there was yet to be an attempt on target. Greece had a long range shot just after half an hour but their shot was deflected by their own player and sent away from the goal as they went in search of the first goal in this battle of the underdogs.

Salpingidis came excruciatingly close to breaking the deadlock towards the end of the first half as German born, Olympiacos defender Holebas put in a dangerous looking ball into the far post from the wing. The PAOK man got a clean shot on goal only to be denied by  Keylor Navas’ shin. It was the closest either of the 2 sides came to taking the lead throughout the first half.

Greece ended the first half arguably on top and they continued in the same fashion as they registered the first chance on goal in the second half. Celtic man Geogrio Samaras got onto the end of a free kick with his head, unfortunately it was straight at the Costa Rican keeper, making it an easy save. They were down at the Costa Rican end of the pitch again a few minutes later with a corner but the corner came to nothing in the end as Christodoulopoulos’ header went high and wide, not even threatening the goal.

Just a matter of minutes later Bryan Ruiz put Costa Rica ahead against the run of play. The former Fulham man, who had already scored the goal against Italy that knocked England out of the tournament, hit the ball first time from the edge of the Greek box and steered his effort into the far corner, not even giving the Greek keeper a chance to save the ball. The goal gave Costa Rica a new breath of life as they went on in search of their second goal, and they were unlucky not to get it as Sokratis was seen to handle the ball in the area which would have meant a Costa Rican penalty if the Referee had seen it. Unfortunately neither the ref nor his assistants saw the incident so Greece got away with it.

The tables quickly turned on Costa Rica as Duarte was sent off in the 65th minute as he picked up his second booking of the night which saw Costa Rica go down to 10 men. Holebas was breaking down the wing and the centre back had no option but to bring the man down. The resulting free kick saw Samaras head just wide. The ball was now in Greece’s court and it was just a case of could they score the 2 goals they needed to win.

The red card completely changed the dynamics of the game as Greece were started to make the extra man count, starting to lay siege on the Costa Rican goal. There were a few nervy moments in front of goal as Navas fumbled a ball with 3 Greek players in close proximity. Luckily for him his defence were on hand to clear the ball away from goal, thwarting the Greek push on goal.

With time running out Greece needed a goal and they needed it fast. They received a free kick with 10 minutes left on the clock but it came to nothing but another Costa Rican goal kick as the header that resulted from the free kick went wide. It just did not seem that Greece had a goal in them as they desperately continued their search for a goal that would at least push the game into extra time. They came whiskers away from getting that goal in the 87th minute as Christodoulopoulos cut in from the wing to send in a low driven cross towards goal. Navas got onto the end of the cross, but not before fumbling the ball and having to rely on a lucky bounce to save the ball a second time, the Footballing Gods were looking down fondly on Navas for that one.

Sadly Costa Rica’s luck ran dry in the first minute of added time as Navas continued his habit of fumbling saves. The Levante keeper saved Gekas’ initial shot, but he parried it away straight into the path of Papastathopoulos, who asked no questions and thundered the ball into the back to the net with his first goal for Greece. They almost snatched the winner in the last minute of added on time as a looping shot almost beat Navas, the keeper managed to tip the ball over the crossbar and landed awkwardly in the process, but it kept his side in the game as both sides ended the 90 minutes at 1-1.

Greece continued to turn up the pressure on Costa Rica during extra time as they had the better of the chances during the opening few minutes of the first half as Costa Rica looked to hold on for a penalty shootout. Katsouarnis looked to be through on goal as some sloopy Costa Rican defending saw the ball slowly trickle through to the PAOK midfielder. His shot was saved by Navas for a corner which resulted in nothing. Costa Rica looked out of ideas and it was evident as they failed to get much going in regards to attacking moves. Their best chance of the first half coming when Brenes found himself in space in the Greek box, his low cross was easily picked up by the Greek defence as the slugfest continued.

Greece had the best chance of the second half in the 112th minute as they broke from a Costa Rican corner. Out-numbering the defence 5 to 2, they laid the ball onto Mitrioglu but the Fulham man continued his disastrous 2014 as his limp shot was straight at the keeper. He could have stolen the win for the EURO 2004 Champions as a he found himself in space in the 120th minute but he shot into the ground which made it easy for Navas to keep his country in it and see the game go into Penalties.

Both teams scored their opening and second penalties confidently as both sides refused allow nerves to get the best of them.  The first miss of the shootout came when Navas saved Gekas’ penalty, it being Greece’s 4th penalty meaning that all Costa Rica needed to do was score their final penalty and they did. Umana put the ball confidently into the back of the net, sending the Costa Ricans into party mode as they reached their first quarter-final, thus continuing their fairy tale story. They now face Holland in the next round as they look to maintain this underdog story that has captivated the world.