Costa Rica Through, England Out 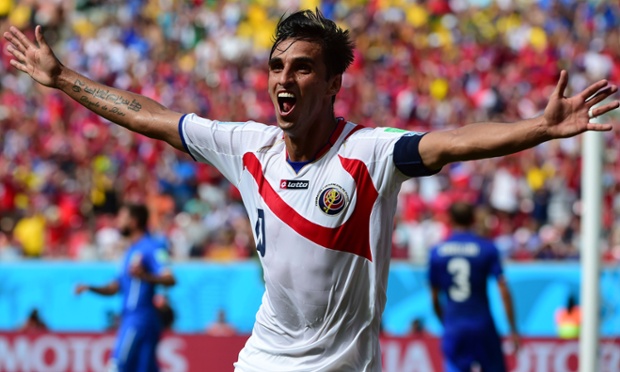 Costa Rica made history as they beat Italy 1-0 in Recife sending England crashing out of the World Cup and themselves through to the second round.

The weight of two nations was on Italy’s shoulders as they entered their second group game against Costa Rica with a win for the Azzurri all but sending the Italians into the last 16 and leaving a slither of hope for England fans.

The Italians were boosted by the return of veteran goalkeeper Buffon but started slowly against an ambitious looking Costa Rica, losing the ball easily a number of times in the opening stages but Costa Rica never looked too threatening.

The first chance of the match fell to Thiago Motta 25 yards out but his well-hit shot strayed wide just before the half hour mark. Just moments later, Mario Balotelli was through on goal and tried to lob Keylor Navas, the Costa Rican ‘keeper, but couldn’t get his shot on target, a chance that the former Manchester City striker doesn’t normally squander.

Balotelli was beginning to look dangerous however, as he again found himself with a decent opportunity, this time striking the ball straight at Navas from the edge of the box. Italy were tested soon after when Bolanos’ struck from just outside the box, Buffon managing to push the winger’s shot round the post.

Joel Campbell was bundled to the ground in the Italian penalty area as he made a great run past two defenders but the referee was quick to dismiss any Costa Rican penalty claims as Italy were left thanking their lucky stars. It didn’t matter however, as captain Bryan Ruiz got on the end of Diaz Campbell’s cross, heading the ball against the crossbar and down across the line with goal-line technology confirming the goal right on the stroke of half time.

Five minutes into the second half, Navas was called into action as he just managed to get his fingertips to a thunderous strike from Matteo Darmian who had cut in from the left. Costa Rica then conceded a free kick 30 yards from goal, which Italian magician Andrea Pirlo almost converted but couldn’t quite get enough swerve on the ball.

Neither team created anything of note in a very slow tempo’d half of football despite the Italians dominating possession throughout. Four added minutes were not enough for the Azzurri to get the equaliser they so desperately looked for, in fact Costa Rica almost doubled their lead as Brenes’ curling shot beat Buffon at the far corner but also beat the post.

Italy’s fate will now come down to their final group game against Uruguay on Tuesday while Costa Rica’s final game will come against an England team with nothing to play for.