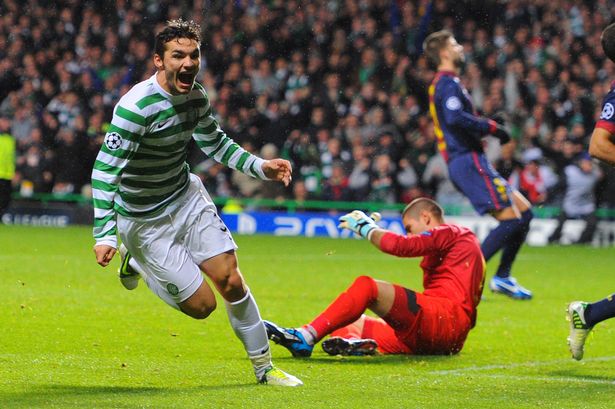 Celtic FC tonight rewarded their fans for 125 years of world-class support with a glorious win over none other than the colossal FC Barcelona. In a game expected to pose little threat to Barcelona’s European ambitions, Neil Lennon’s men threw a spanner into the, usually so efficient, Barcelona works to beat the Catalan Kings 2-1 at Celtic Park.

Goals from Victor Wanyama and Tony Watt either side of half time put Celtic in control despite Barcelona’s typically superior possession before Lionel Messi scored a stoppage time consolation goal for the visitors.On paper the two teams were worlds apart and many pundits made no bones of the fact that the Scottish champions would have to produce the performance of a lifetime to get one over on Tito Vilanova’s side and boy did they produce one!

The atmosphere inside Celtic Park was scintillating right from the kick-off as the fans took in such a momentous occasion. Yet it would take more than a raucous, Scottish atmosphere to frighten arguably the best team ever as Barcelona’s pocket rockets controlled the opening exchanges – frustrating the much more physical Celts. Celtic however used that physicality to their advantage with twenty-three minutes gone as hot prospect, Victor Wanyama, rose above the defence to glance Charlie Mulgrew’s well-placed corner past Victor Valdes in the Barcelona goal.

So many times this season Barcelona had been exposed from set-pieces and they’d suffered again here as an elated Celtic Park erupted with excitement. Celtic looked in control for a few minutes as Commons and Samaras almost combined to double the home side’s lead but some smart goalkeeping from Victor Valdes stopped them in their tracks. Barcelona, never a side to lick their wounds, were soon back to their usual dominating selves and launched a relentless attack on the home side’s defence. Jordi Alba, Alexis Sanchez and the mercurial Lionel Messi had Celtic fans’ hearts in their mouths with each of them having chances to strike back for the Catalans before half time but the ball just didn’t want to find the back of the net.

With the Barcelona assault continuing deep into the second half it was seemingly only a matter of time before the Catalans got their reward of an equaliser as Celtic could barely get out of their own half. Celtic goalkeeper, Fraser Forster on the other hand had different ideas producing a herculean effort to keep the Barcelona strike force at bay. The Englishman produced magnificent save after magnificent save to eat away at the Barcelona resolve and give his team-mates belief that they could go on and win the game. Forster then did more to aid his team, thumping a goal-kick up field to teenage stalwart, Tony Watt, who raced clear of the stuttering Barcelona defence to place the ball past Valdes and rocket Celtic fans into delirium as they were on the verge of the unthinkable. Celtic Park was bouncing all the way to the final whistle; even a consolation goal from Lionel Messi couldn’t dampen the mood.

Neil Lennon’s side had completed their biggest European achievement since winning the European cup forty-five years ago and had stunned the football world in the process. It wasn’t the most clinical of wins for Celtic but a win over Barcelona rarely is. This was a triumph for Celtic fans and Scottish football alike as this result brought the media focus back to Scottish football rather than the recent financial troubles of other big Scottish clubs. With Celtic now needing only two draws in their remaining group games to secure their progression to the knockout rounds it’s looking very likely that another triumph for Scottish football is on the horizon.