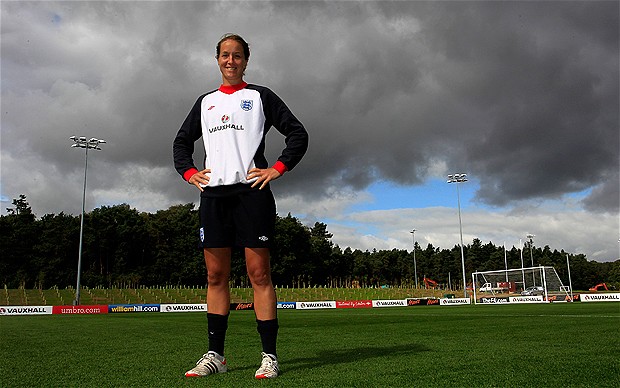 England women’s captain Casey Stoney and NFL prospect Michael Sam have both publicly revealed that they are gay.

Stoney, who has made more than 100 appearances for her country, courageously revealed in an interview with the BBC that she had hidden her sexuality for most of her life and often lied about her partners in fear of what her peers would think. However, she was inspired to ‘come out’ when British Olympic diver, Tom Daley, was bombarded with well-wishes on social networking sites.

“I feel it’s really important for me to speak out as a gay player because there are so many young people struggling with being gay”, Stoney said.

She continued, “How can I expect other people to come out and speak about themselves if I’m not willing to do that myself”.

The Arsenal defender stated she would not be attending the World Cup’s in 2018 and 2022, which have been awarded to Russia and Qatar (the latter having strict laws against homosexuality), because she would not be accepted.

American football prospect Michael Sam has also opened the door on his sexuality, which could lead to him being the first athlete in the top four of North America’s professional sports leagues (American Football, Baseball, Basketball and Ice Hockey) to compete as an openly gay male.

The former Missouri defensive linesman is expected to be a mid-draft pick in May’s NFL draft and his announcement has rightly been welcomed by the National Football League.

“We admire Michael Sam’s honesty and courage. Michael is a football player. Any player with ability and determination can succeed in the NFL”, their statement read.

Their announcements come at a fitting time with the controversy currently surrounding the Winter Olympics in Sochi due to the treatment of homosexuals in Russia and will hopefully inspire other athletes to be open about their sexuality without fear or hesitation.